This week's show is the interview we recorded with the very lovely Garrett Wang, best known for his role as Ensign Harry Kim in Star Trek Voyager. We caught up with Garrett at this year's SFW7 event.
You can follow Garrett on twitter at https://twitter.com/GarrettRWang
For more information about the Sci Fi Weekender and to book tickets go to http://www.scifiweekender.com/

So, it finally arrived. Find out what the guys made of the new Batman vs Superman movie. This week, we also review 10 Cloverfield Lane, Daredevil Season 2 and feed back from this year's Sci Fi Weekender.
For details on Juliet Landau's Indiegogo campaign check out https://www.indiegogo.com/projects/a-place-among-the-undead#/
For details and to book tickets for next year's SFW8 go to http://www.scifiweekender.com/

Episode 62: Pride and Prejudice and Nerds

On this week's show Brendan and Spindles review some of the latest movie releases, feed back our experiences from OxCon, pick out the things we're looking forward to at this year's Sci Fi Weekender and more.
For more details on the Sci Fi Weekender check out their website at http://www.scifiweekender.com or their facebook page https://www.facebook.com/scifiweekender

SFW, originally known as the Sci Fi Weekender and now in its 7th year, will bring like-minded people together for a weekend to fully immerse themselves in a sci-fi & fantasy culture. The weekend will play host to some of the world’s most popular science fiction and fantasy films and TV-shows.

The film revolves around the leadership trials of the Varosha Tribe. Eiren, Ares and Thade are all in line to lead the next generation of their people. They journey out of the safety of their home towards a dark forest miles away where tradition dictates a new leader will be chosen. Only one of them will return. 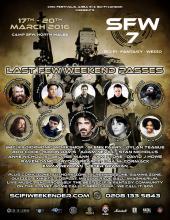