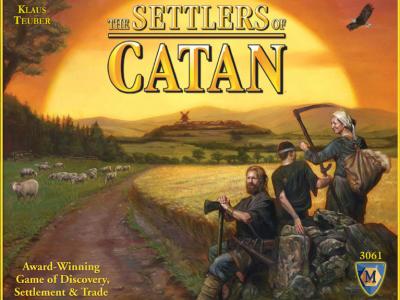 It was 9am on a wet Sunday morning as I made my way to Thirsty Meeples, the glorious mecca of gaming and geekery, in the heart of Oxford.  Why was I up and shambling around at such an unholy hour? Well, for the regional finals of the UK Settlers of Catan tournament.  Obviously.

Here is my account of the day, how I fared in the games, what mistakes I made and what lessons I learnt over the course of 5 hours of seriously intense board gaming.  Obviously the account only takes into consideration the tables I played at, as I couldn’t be everywhere.  This account also assumes a level of familiarity with the game.  If you've never played it before then you should check out Wil Wheaton and Friends playing it on TableTop.  (There's a link in the sidebar where you can got to pick up your own copy, it's totally worth it)

First off, a brief description of the format of the tournament might be useful for context.  The players were split up onto different tables for the start of the round robin phase of the tourney.  Over the course of three rounds each player was trying to secure enough points to get a seat at the final table.  Points were awarded as follows:  5pts for a win, 2pts for second place, and that’s your lot folks.

With the resource tiles and numbers placed, and development cards shuffled, it was time to roll for first placement.  The player to my immediate right rolled highest, meaning I was going second, not a bad situation to be in on what was a fairly open board.

My strategy going in was to get reliable brick production as quickly as possible.  Brick and Ore are the rare resources, with only three tiles each, as opposed to four tiles for wheat, wood and sheep.  Brick is arguably more valuable than ore, especially in the early game when quick expansion should be a priority.  As luck would have it, I managed to get a placement that would allow me to to produce brick.  I gambled that my second placement would find a free wood tile, allowing for road building. Longest road is another viable strategy, but it is not without issues, but more on that later.

Feeling happy with my first placement, i watched with growing concern as the next set of placements showed a decidedly combative air to the game.  By the time it had gotten back around to me for my second placement, it was clear that longest road was not going to be a viable option.  Every player was contesting multiple tiles early on, and everyone was already looking very much penned in.  Wood tiles were out for me, the gamble hadn’t paid off, so I switched up my strategy. I found a reasonable Ore tile and a close by 3:1 port.  With sheep and wheat production also covered , I could at least play for development cards and hopefully Largest Army.  Largest Army is an easier 2 VP condition to disguise, unlike Longest Road which is obvious to all other players.  Also, a pile of face down development cards in front of you does somewhat deter other players from targeting you with the robber.  It is in an expensive strategy though, at 3 resources per card.

The game played on. And on.  I mean, it was probably the longest game of the day. It dragged.  With wood production stymied, and an enclosed board, no-one was really expanding anywhere.  I got my two settlements up to cities fairly quickly, a good run of dice and number positioning meant that Wheat and Ore were plentiful for me, but after that my game stalled somewhat.  Without access to wood, I couldn’t expand to the port that was sitting so tantalisingly  close.  I switched to buying development cards, picking up the Knights I needed (48% chance to draw a Knight) fairly quickly.

Largest Army put me up to 6pts, and a few lucky draws from moving the robber had given me the resources to build a road to the 3:1 port, as well as a settlement there.  That put me on 7pts, which is where I stayed until the end of the game.  Without anymore Knights to dissuade my opponents from attacking me with the robber, it wasn’t long until my big Ore producer (a case of too many eggs in one basket I feel) was blocked out.  Without access to ore for further dev. cards or city building, my game was pretty much over unless someone rolled a 7 to move the robber.

That never came, and I ended up finishing in second place for 2 pts.  An inability to generate  space for expansion and settlements really crippled my early game, and my late game strategy just wasn’t good enough to steal a win.  Lessons were learnt, time for game two.

New table draws were sorted and new players met, as we sat down for Game 2.  Of the other players on my table, only one other had scored points in the first round; also finishing second at their previous table.  I felt that if I was to have a chance of making the final table, then I had to dominate this game early.  I had second shot at placement again, and I’d been left an open Wood/Brick cluster, with premium numbers, that I took advantage of straight away.

The other players placement was much friendlier this time, and when it came back around to me I was left with the chance to block off my side of the board and control a number of good producers.  No access to Ore, but with key ports within striking distance I gambled that my late game would see me with a glut of resources I could trade for Ore.

My “expand at all costs strategy”, learning my lesson from game 1, worked a charm and I pulled ahead to an early lead with additional settlements going down fairly early on.  The problem with taking an early lead is that you do quickly become a target, and whilst the robber did come for me on a number of occasions it never really slowed my game.

Longest Road soon arrived, and with all five settlements out and my ports secured I was able to trade off for Ore.  With all resources available to me i was soon able to turn my 7pts to a winning total.  Largest Army, and then a settlement to a city and it was GG.

A combination of solid strategy, good initial placement, and a slightly passive table all worked to my advantage.  The win gave me 5pts and put me on to 7pts on the overall leaderboard.

Alright, not gonna lie, maybe it was the Chocolate Shake and Jelly Babies, or maybe it was the fact that this was a very chatty table draw; but I don’t remember many details from this match.  I was having too much fun with the other players, and wasn’t concentrating enough.  I’m fairly sure I missed a couple of card draws because I wasn’t paying attention.

I stuck with the strategy that had gotten me this far, and whilst it worked better than in the first game, my second round victory was not repeated.  I managed to hit 8pts, but that was where my game stalled.  Heading into the final reckoning, I was tied in 2nd place with the player to my right, whilst the player on my left was clearly heading for the win.  I desperately tried to trade off for the resources that would get me the precious VP that would mean I wouldn’t split the second place points, but alas it never came.  I ended up tied for second, with the points split one a  piece between us.  That put me on 8pts on the leader board, and it was squeaky bum time as I waited, impatiently, for the outcome of the other games in the round to see if that total would be enough to get me a spot at the final table.

Fortunately my leader board total was enough to get me a seat in the Final Four.  I found myself facing off against the player who had won my first round game.  He’d picked up two  victories in the round robin stage and had been consistent throughout.  One of the other players was a former UK National Settlers of Catan champ, and had represented the UK at the World Championships in the US.  So, no pressure then...

The resource distribution for the final table was..not optimum, and all three brick tiles were in a cluster on one side of the board.  One of them had an 8 (a premium number) and as I was placing first I made sure to take it.  By the end of the placement stage I had managed to cover resource production from every resource apart from Ore.  But with a 2:1 wood and a 2:1 brick port within easy grasp, I wasn’t too concerned about my early game.  As with Game 2 I crept out to an early lead, but this time game was tightly fought and my opponents were building settlements and cities at a worrying rate.

I picked up Longest Road, after drawing it out for a while, and ended up with all my settlements out.  But with no Ore production I couldn’t get any further, I had stalled at 7pts and on a fiercely competitive table that was just bad news.

And then I dropped to 5 points... I mentioned earlier that the Longest Road Strategy has weaknesses, and this is the key issue.. It can be taken away so quickly.  If you go for a Longest Road, or even a Largest Army, strategy then you have to commit to it and stay on top of it.  If you ease up someone can steal those 2 VPs away from you for very little.  Fortunately I was able to claw back my longest road, but not without first trading off a number of resources that could have gotten me a city.  The short term goal was key though, and I had to get back to 7pts to remain in touch with the leading pack.

I had two settlements on Brick (8) and Wood (6) and i had the correspondfing 2:1 harbours, but the strategy was taking too long to reap dividends in terms of Ore.  Robber placement kept me hampered a little.

And that’s how it finished.  Third place at the final table.  The eventual winner had been the most consistent player over the course of the tournament, and deserved his First Round Bye at the Nationals.  I’ll be there too, hoping to go two places better and win a spot at the World Championships.

All told, it was a fantastic experience.  I have made it through fields of 200+ players in Casino environments to final table poker tournaments before now, and right now I genuinely couldn’t tell you which experience made me more tense; that or Catan.

If you’re ever in Oxford, you should definitely head to Thirsty Meeples.  Get a bowl of Jelly babies and play some board games.  You know it makes sense.