Attack on Titan: Live Action Film – UK Release in mid October and a look at the critical response from the Japanese release 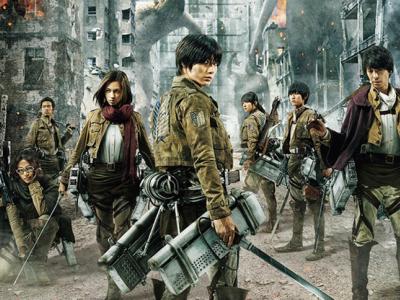 Last week’s Manchester Comic Con was an incredibly fun and surreal experience, from seeing the mass of ‘Attack on Titan’ cosplay to dancing ‘Metal Gear Solid’ cardboard boxes. I am still waiting on a few videos of Q and A sessions from the event covering the voice of Naruto, cast from the Arrow and two of Doctors (Colin Baker and Sylvester McCoy). Unfortunately no gaming news from this event, but have no fear gamescom is pretty much here.

In the mean time I thought it might be appropriate to write a piece on the recent buzz around the live-action version of ‘Attack on Titan’ which caused a bit of a shockwave at Comic-Con.

‘Attack on Titan’ (also known as ‘Shingeki no Kyojin’ in Japan) is a manga and anime series which has gained in popularity over recent years. The vast numbers of ‘Attack on Titan’ cosplay outfits at Comic Con seem to attest to that. The story revolves around three main characters, Eren Yeager, Mikasa Ackerman (Eren’s adopted sister) and Armin Arlet.

Humanity hides between three enormous concentric walls in which they have lived peacefully away from the titans for 100 years. The titans being colossal humanoid creatures the eat humans and have decimated the population. The start of ‘Attack on Titan’ signals the storm that breaks this peace.

Perhaps what draws such a cult status to the series is the way in which it can attach the reader or viewer to the characters at an incredibly fast pace. This is a double edged sword in a sense, as that attachment is often broken with deaths of characters you have grown attached to being depicted in a much more brutal and impactful way than those deaths seen in western television shows such as Game of Thrones. (perhaps that’s more an opinion of mine than an actual statement, I will let you be the judge).

Yet what does the live-action film entail? Does it meet the standards and match the cult following the manga and anime have garnered?

I think in reality this would never be easy to achieve, but the film on several levels appears to fall flat. The first film in the duology of films titled simply ‘Attack on Titan’ was released on August 1st 2015 in Japan, and from analysing and reading the Japanese critics response to the film, questionable design decisions abound. For example Mikasa in the series is the only Japanese character, she is portrayed as a rare and special type of person, the last Japanese person in the world, yet this uniqueness is stripped away in the film as the entire cast is Japanese.

The acting within the film isn’t the best either, according to critics, there is an overly melodramatic feel to the opening and it appears to assume knowledge of the characters and their stories, hoping to distil an emotional attachment without ever actually offering one. The film seems to attempt to rely on the audience’s previous knowledge to fill in the gaps in character development. This reliance on assumed knowledge is not only a risky move but it also alienates newcomers to the series and may leave a bad taste.

The saving grace of the movie would be the titan’s themselves. Many critics have responded positively to their representation in the film and yet when the voiceless villains become the most positive aspect of a film, one has to wonder how did they get the story so wrong? From cutting characters such as fan favourite ‘Levi’ to adapting and reducing large portions of the story and struggling to fully flesh out the characters. If you’re interested in story and character development it may be better to read the manga or watch the anime to gain more depth to the characters and world. While the sequel may rectify some of these issues, its release will come in September in Japan, which leaves little time to adapt to the critical response of the first film.

As a fan of manga and anime, I sometimes wonder whether it is possible to successfully encapsulate lengthy series into feature films. Character development is a key factor in why lengthy series such as ‘Naruto’, ‘Bleach’, ‘One Piece’ and ‘Attack on Titan’ are so intriguing. Attempting to create a more concise version can often take away from what makes these series great, as appears to be the case in ‘Attack on Titans’ film representation.

Overall it appears that sticking to the anime or manga may be your best bet to enjoy the series, however the film hasn’t hit the UK so there’s still time for change, however unlikely. Perhaps the critics are being a little unfair in their response? Maybe the film will suit a western audience better? Although I doubt this, they are things to consider. I will hold my judgement until the UK release, which was announced at Manchester Comic Con as being mid October this year.