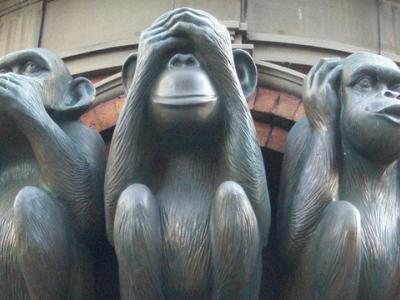 You can guess by the title of this rant that there are spoilers included in this article.

There are indeed spoilers.

And although at least two of these spoilers are now going to be common knowledge, I wanted to talk about WHY those spoilers exist , since there are parallels between all three.

So just to make absolutely sure that you have all had opportunity to not read any further. There are SPOILERS!!

All clear about the spoilers then?

‘Yeah,yeah’ I can hear you say,’I bet this is some rant about how someone revealed some bit of plot line on the Internet that you came across when you weren't expecting it’ .

Well yes that did happen, I was reading a comments section on a news article about a mass shooting.

Smack in the middle of a depressing argument were three or four bullet-point one-liners with major plot points for the new Star Wars movie.By the time I realised what these bullet points said they were already lodged into my brain and blowing raspberries at me.

Suffice to say I was not happy, (not that the rest of the material on screen was very cheery).

So to recap, we all know that it is now difficult to avoid spoilers. Film producers go to extraordinary lengths to try and protect plot points from those who want to ruin people's enjoyment. Secrecy clauses, watermarked scripts, filming multiple endings, they are all part of the film-makers toolkit to obfusticate the trolls.And of course build up the mystery and pull in the punters.

...I think there are enough spoilers out there, and the first two on the list are for films no longer at the cinema, so they shouldn't be a surprise.

Still, the principle remains. In order to protect the plots of their film's, scriptwriters and producers are now actively writing in false names for major characters.

And it is crap…

Even J.J.Abrams now admits that it was a mistake not to just call him Khan in the first instance. I mean ‘WHO ELSE COULD IT POSSIBLY HAVE BEEN !’ There is only really ONE memorable villain in Star Trek!

Then there is ‘Spectre’.

So you call your Bond film after the name of the one organization that that anyone who has seen a Bond film knows. Then you sell the one of the big name stars as being ‘The MYSTERIOUS villain named Oberhauser’ and it is hardly going to take a towering intellect to work that one out.

In BOTH of these movies a character is written into the major plot line so that they can be revealed to be someone else that the audience will have heard of. And it weakened both films.

Neither Benedict Cumberbatch nor Christof Waltz we're going to be minor characters, so the big reveal, and the convoluted story-lines that went with them just served to irritate the audience. Everyone knew it was Khan. The complicated history of Oberhauser became a cringe-inducing sibling (adopted) jealousy story that wouldn't have been out of place on a third-rate daytime soap opera.

On to Star Wars.

I’ll keep this short. Mostly because the reveal of the character is so early in the movie that it isn't actually worth doing in the first place. Leading to the conclusion that it has NO PLOT PURPOSE AT ALL, and it's only there at all because SOME people can't metaphorically keep it in their pants…

Three unnecessary pieces of plot that take up screen time to set up, introduce extra complications to try and deceive the audience, only to reveal something that the audience already suspected.

And by doing this of course, this is helping the very idiots that want to ruin it. Without these extra bits of plot to reveal, there is...well...less to reveal.

So what is the answer when it is no longer just a game of spoil the surprise, but actually spoil the plot?

Try to cover up the info and the trolls plaster it everywhere they can? Remove the information and have less in the movie?

But perhaps having a bit more courage and faith in the audience might help limit the damage.

For all of the films above, I don't think revealing these characters in advance would have done any harm. I think it might have helped Star Trek actually (and boy did that film need some plot re-writes), I mean think about the marketing posters...

The film title could have remained the same, but the posters could have had a white cat on them ! (Although this might have given rise to a whole load of Internet smut, with an overuse of the word that Sean Connery pronounced ‘Poooosy’ in Goldfinger).

And as for the Star Wars film…

Well I'm not going to give anything more away than I have….

I’ve said too much!

But I REALLY enjoyed that bit of the film