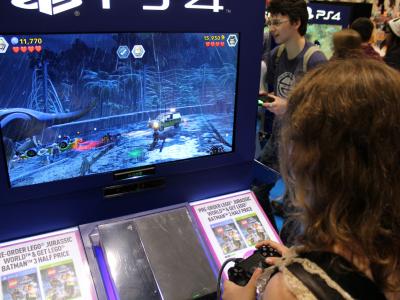 It's May, and it's MCM. That can mean only one thing. Bring on the games.

So, the main game we got our hands on over the weekend was Lego Jurassic World. Obviously, since the film is yet to be released, the levels on offer here are those from the original Jurassic Park movie. First up is the scene where Dr Sattler is inspecting a poorly dinosaur. Right from the outset, the humour that permeates most other Lego games is on show with Dr Sattler's ability to dive into a festering pile of Dinopoo and unearth an object vital for the quest. This level has you running around finding various items to make the sickly dinosaur better, including Ice Lollies and Apples. The fun really kicks off when you have collected all the items and suddenly you have the dinosaur as a playable character. My cries of "I'M A DINOSAUR" rang out around the Excel convention centre and it wasn't long before all the other kids around me discovered the same thing and joined in. So, shouting "I'M A DINOSAUR" at the top of your voice while playing this is now a thing okay? The second level on offer is the iconic T-Rex attack and sees you playing Dr Malcolm, Dr Grant and the kids all trying to evade the hungry T-Rex. For long time fans of Lego games there doesn't seem to be a whole lot new in terms of gameplay, but once again they have delivered way above expectations in terms of the humour of the cut scenes and diversity of playable characters. Lego Jurassic World is out on 12th June.

Next up, we saw some footage from the forthcoming Arkham Knight game. Continuing on from the success of Arkham Asylum and Arkham City, this franchise just keeps getting better and better. This time round Bats is up against the team of Scarecrow and new baddie, the Arkham Knight, voiced by the legend that is John Noble (Keep an eye on the site for our interview with him coming soon). As well as the usual array of gadgets and gizmos there have been many new additions to the combat system including environmental takedowns, batmobile assisted takedowns and cinematic room entrances such as crashing through skylights into the midst of the bad guys. The Batmobile itself forms a big part of the game and can be operated in either pursuit or combat mode. When in combat mode, the Batmobile can manuever in tight spaces with a tight turning circle allowing you spin on the spot through 360 degrees and features a whole host of new attacks such as the riot cannon and the awesome Missile Volley. This is shaping up to be an excellent addition to the franchise and is out on the 23rd June. Check out the trailer below.