This weekend, in a galaxy far, far away... 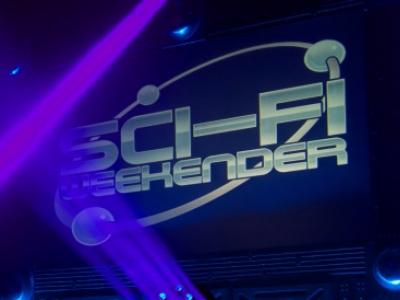 After a whole day in bed variously sleeping and hacking up chunks of lung, I'm almost feeling human enough to give a brief account of our weekend away at the Sci-Fi Weekender 4.

For those of you who have never heard of, or experienced it, the SFW takes over a holiday camp in North Wales for a weekend, fills it with around 4000 rabid sci-fi fans and puts on a show of authors, actors, musicians, comedians and much more for their entertainment. We had our first experience of it last year when a couple of our friends won tickets and invited us along. Despite the run-down Pontin's apartments, poisonous canteen and the 10 hour journey home due to our car breaking down in the Apocalyptic Blizzard of January 2012, we decided to go along again this year and take our daughter along with us.

The journey there was a trek through the mountains of Middle Earth complete with frozen waterfalls, free range sheep and small hamlets with greasy spoon internet cafe's serving massive all day breakfasts with vats of tea, sausages with so high a bread content they could be served next to the crumpets on the bread aisle and menus that are presented in both Common and the ancient language of Mordor. After more than six hours on the road we arrived at Hafan Y Mor and went through the relatively painless check-in procedure before settling in to our frankly awesome accommodation. Yes it was arse-bitingly cold, but we eventually worked out that the heating that had less of an operating process and more of a treasure hunt for the relevant isolator switch, followed by a search of the room for the convection heater hidden in a dark recess in order to turn on the switch on the front of that unit before blessed heat issued forth.

Wandering over to the Mash and Barrel on the first night we settled in with a few drinks and a meet up with loads of lovely people who I only previously knew by their twitter handles. We were formally inducted as members of Team Sailor Jerry and had a preliminary wander around the Spaceport Trader zone where I foresaw the spending of far too much money on the cool stuff there.

Friday morning took us into the Main Void for the opening ceremony and then on to a packed programme of panels, signings and screenings. Of the day's panels there were several stand-outs, Manu Intiraymi was incredibly funny, Chase Masterson was utterly charming, and my daughter got up at the very well attended Steampunk panel with Robert Rankin, Jonathan Green, Raven Dane and Sam Stone to ask her first ever question to a panel, which was very well received by all. Followed by a trip to the author zone where we bought a load of books and Megan met all the aforementioned authors and asked more questions that she couldn't fit in at the panel.

The Friday night Imaginarium, while being (imho) better than the previous year with more acts and less scantily clad gyrations still felt a little stale with acts performing the same routine verbatim from the previous year. Highlights of the show being Mental Dave, The Theremin Hero and the intro to the V for Vendetta stage production.

Once the child had gone to sleep we went down to the Mash and Barrel again with the intention of having a drink and watching the late night screening of The Rocky Horror Picture Show, however ended up chatting with Jonathan Green and Herr Döktor about Doctor Who, Steampunk flavours and (after many beers) the answers to Life, The Universe and Everything (including MacGuyver). As a result, we completely missed the screening, ah well... There's always another time for Rocky Horror, but never enough time for geeky chats.

Saturday we got into our lovingly (mostly) handcrafted cosplay outfits as The Potter-Hasts. Meg was Hermione, I was Snape and Emma put together a wonderful last minute Bellatrix inspired Random Dark Witch outfit. We had another packed day of panels and signings and saw some absolutely amazing outfits throughout the day. High points of the day were the Doctor Who panel with David Howe, Peter Davison and Frazer Hines, and, of course, the inimitable Brian Blessed being interviewed by Robert Rankin. The one down point for me on Saturday afternoon was the sound issues that made the V for Vendetta stage play virtually unwatchable. I really feel for those guys at it looked amazing and they were absolutely professional carrying on in the face of all the technical problems.

Saturday night was a wonderful mash up of entertainment in the main void with the absolutely amazing Professor Elemental, and a quiz between Dez Skinn and Robert Rankin to discover the master of the re-universe through the medium of charades, multiple choice questions and audience participation. Megan, oddly spent more time on the stage than in the audience, first finding new monkey butlers for herself from the audience, then helping out the Rankinsiders quiz team in its quest for re-universe domination and finally for the Harlem Shake filming. The Cosplay finals were followed up with a marvellous set from Phil Hutchinson from The Geek Show and Craig Charles' funk and soul set. And our evening was finished off to perfection  with a couple of beers and a chat with Mr Rankin and the Lovely Lady RayGun.

All together it was an exciting, exhausting, exhilarating weekend. We've already signed up for the next one and *fingers crossed* we may even be getting involved in the weekend with our podcasting. So... A massive thank you to all involved, it was lovely to meet you all and I look forward to seeing you all back in the Shire.

Photos are up on facebook for your visual pleasure.