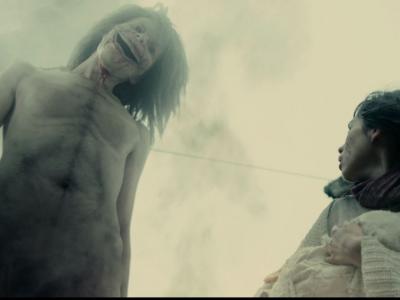 To say I was excited about seeing these films is perhaps somewhat of an understatement. I love the series and was more than intrigued to see how well it would translate on to the big screen.

To set the stage for the uninitiated: Attack on Titan is set 100 years after the remnants of humanity seal themselves behind a series of concentric walls to protect themselves from giant, man eating monsters called Titans. The denizens of the walled area have grown complacent and many question whether the Titans are actually real or merely a tale told to keep people in check.

We are introduced to our main characters Eren, Mikasa and Armin three kids who were born and have grown up behind the wall. Eren questions the existence of the Titans and they set off to the wall to prove that it's all a great big fib. Perhaps unsurprisingly it is at exactly this point that a Colossal Titan appears and kicks a giant hole in the wall, unleashing an army of Titans onto the unsuspecting populace. The carnage that follows sets up the rest of the film as what can only be described as being post-post-apocaplytic.

The main chunk of the story then revolves around Eren and the Scout Regiment 2 years after the wall is breached being sent on a mission to plug the gap and retake the agricultural zone as food supplies are running short in the inner zones.

Without ruining the story, what follows is a well crafted adaptation of some of the major strands of the TV series. Some characters have been altered, renamed or entirely axed in order to fit the events of an entire season into two 90 minute films. Sometimes this works, and sometimes not so much, with less time to focus on the individuals comprising a vast ensemble cast, we sometimes don't really care when they inevitably perish in a gory explosion of blood and entrails.

Be warned, this is a pretty visceral film and definitely not for the squeamish, although I was surpised that it was only rated 15, maybe I'm just getting old.

The cinematography is wonderfully gritty and reminiscent in many places of sequences from SuckerPunch with highly stylised visuals topped of with a sepia finish. When we finally get to see the Omni Directional Gear in action the payoff is wonderful. This was one of the things I was very interested to see how they handled as it forms, for me, one of the key elements of the show. The props themselves look amazing and seeing the team mid-flight with swords swinging was worth the ticket price alone. Even with the slightly cheesy 'Tooling Up' scene the sequences with the ODG's are a joy to watch. The combat scenes in general are well executed with the whole creepy, slightly innocent feel to the Titans remaining scarily intact in the translation. There are a few CGI sequences that are a little cringeworthy and likely will not age well, but on the whole the special effects are top notch.

The second part opens up both the character's and the larger world's back story as the team press on towards their goal, hindered by not just Titans, but mysterious rebels and government officials alike. For fans of the show, there are some questions answered here that may, or may not provide answers to some of those raised in the show. That remains to be seen when Season 2 finally comes along.

The main cast are, for the most part, very good adaptations of their small screen counterparts. I'm very pleased that Eren is a lot less whiny and annoying than he is in the show and Armin is a lot more self assured. Mikasa is also wonderful as the battle hardened Titan Slayer. Some standout characters for me though have to be the loveable, axe-wielding farm boy, Sannagi and the phenomenal Hange Zoe, played tremendously by Satomi Ishihara, who provides us with some of the best moments of the film.

If you do get the chance to see these while they are on the big screen, I would highly recommend it as it may well not have the same impact on the small screen. But it would definitely be a worthwhile purchase when it finally makes it to Blu Ray. If you can get to a double bill like I did, then I would say to do so as they work very well as one near 3-hour film that comes to a nicely satisfying albeit utterly gory payoff.