You know when you leave the cinema and there's that uncomfortable silence as folks are still trying to sum up how they actually feel about the movie that just paid to go and see?

Didn't happen this time - it was clear that this pile of garbage was fired out of someones nose with all the force and beligerence of an elephant with a cold.

The Minions Movie left me ffeling not just a little betrayed, but actually sort of inclined toward not caring about the protagonists by no small margin.  Perhaps its because I actually kept finding myself wishing to understand what the three malformed half-wits were trying to convey (which in previous movies had never been a problem, oddly), or perhaps it was because at one point I was actually hoping that ANY of the background characters or even the villains of the piece would take a more proactive role, or perhaps it was as simple as watching a mildly boring kids film that just didn't have the creative panache that Despicable Me had offered, or perhaps I was just genuinely unimpressed with the thoroughly banal attempt to introduce a child-like perspective of late 1960s England.  Who cares, this is a film that just didn't work.

At first I actually thought it was just me after having had a sort gruelling day and been a wee bit uncomfortable and generally a bit tired, but there was a point in the film where I became accutely aware that despite there having been a moment of alleged humour only the youngest of children had chuckled.  And I mean a sort of dry, not particularly committed hack, as opposed to the raucous, exuberant belly laugh that one would expect.

So what went wrong?  What could possibly go wrong with a movie with animated characters?  How could they screw up the delivery and the timing?  Well, it surely wasn't the vocal work of Steve Coogan or Michael Keaton?  Sandra Bullock or Jennifer Saunders aren't know for sloppy delivery... well... maybe Bullock, but then she has to work with George Clooney and that monotone blandness is bound to wear off on you sooner or later.. but hey.  (Yeah, I just said it, Clooney sucks.  He failed to play Batman, doesn't look like a hick no matter how much you ruffle his hair and couldn't even be inspiring as a faux psychic soldier.  Complete trash).

My first theory is kind of similar to the way Natalie Portman reacted to all of the green screen work she did in the Star Wars prequel - no matter how many visual references I'm sure they provided her, but the amount of CGI hamster-wheeling clearly put her off her game.  The same has happened here but with the dialogue - here you have a selection of excellent vocal actors who can accentuate a response easily if they have a tone to work from, but when that dialogue is a polylingual miasmic spitoon of gibberish, no matter how well coordinated it happens to be, there is always going to be something lost in the inflection.

And my word was there something lost in the inflections.  And don't get me started on the pseudo-translation.

Alternatively, it's in no part lacking in the humour.  While Despicable Me 1 and 2 both had their moments of sheer comedic gold (ie: 'ramsbottom', 'quack' and 'Lipstick Tazer!' to name but a few) that offered as much to the youngest film goers as it did to the parents and other light-hearted film fans, the Minions movie simply did not have these qualities.  The previous films had offered moments of brazen stupidity, crudity and a note of slap-stick to the proceedings, often suggesting that the Minions were effectively immortal, invulnerable and perpetually thick seemed to make them more likeable - the kind of creature you'd tolerate around the house because at least they weren't going to poop in your slippers - but in this case the minions were characterised as logical, procedural and, on occassion, positively rational entity.  This in and of itself made them less funny.  Come to the end of the film and there is the now obligatory 'did he or didn't he die' event, which had all the suspense of a broken elevator cable.  Seriously... never has there been a scene so forced in its depiction since the Sparrow / Swan / Turner love traingle snog off of Pirates of the Carribean 2. 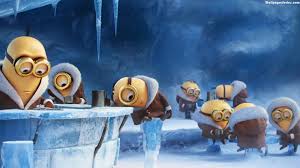 Now for the part that really needs a good swift kick to the short yellow ones: the tedious brit-pop-phile 60's culture references.  Because, and I'm going to be fairly brutal about this, it was thoroughly superfluous, utterly vacuous and not just a little bit shit.

Without ruining the 'gags' in the film, but the audience is subjected to a 'what if' scenario were the Minions to be included in titular pop culture moments - you know the types: The Beatles, fashionistas, general national monuments and some of the trinkets within... you get my drift... well, the script writers clearly didn't.  Sure, it's a kids movie and script really isn't that important (especially when your protagonists are a bunch of lingually challenged morons) and actual events of historical significance don't matter so much because surely they'll not know their meaning... OR WILL THEY!?!

The child in the row two ahead of me clearly did!  That magnificent moment when a child, perhaps 8 or 9, blurts out with 'There's no Sword in the Stone in London.'  That got the biggest laugh out of me.

And that kid didn't laugh nearly as much as I was expecting them to.  If they had, I'd be thinking something more along the lines of 'well done, Minions, at least you got your target audience going', but when they sound more bored than I do, then there's a whole giant bag of skittles away somewhere.

There, however, is one major issue that needs to be settled in all of this - who was this film aimed at?  The kids?  Well, since there are a whole mess of scenes with pop cultural references in it that they simply wouldn't get or even recognise, possbily even for years to come, there really wasn't a massive amount of the joy to be had there - the child-like slap-stick, 'bum' jokes or even clever visuals were simply lacking (hence bored child shifting around in their seat, looking for more scraps of over-priced cinema food), while the pop culture references themselves were simply nothing more than a smile or a knowing nod but in no way were they deigned laughable.  A get to say this because NO ONE ELSE LAUGHED EITHER!

You know what, I'm going to say it - all the funniest bits were in the trailer. 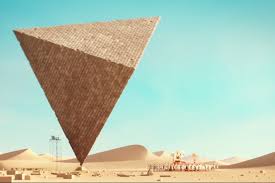 And even some of them, once they've been lengthened out just aren't as funny as they were in the short, snappy bite-sized chunks.

So is there anything good about this vile onslaught of incomprhensible spam?

It was pretty.  The animation was first rate.  The voice acting was spot on.  There was absolutely nothing in it that would offend even the most curmudgeonistic wet-nurse.  It had clearly had enough tech-support to ensure that the audience didn't end up with yellow-induced headaches.  After that, not so much.  I'm sure if we'd seen it in 3D it would have looked even better but then modern 3D / IMAX tends to look pretty damned fine most of the time, so if they screwed that up it's pretty fair to assume all those students that have just broken up and are staving off the necessity of having to get a job before they get their exam results may just go and get a refund. 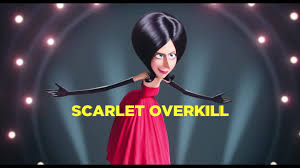 Oh yeah, and Scarlet Overkill (Sandra Bullock) was perhaps the second best thing in the film after watching Queen Elizabeth II knocking back beers while effortlessly arm wrestling some thugish sailors and recounting a cracking yarn.  But even by that point it was way too little, WAY too late.

So, assuming you aren't thrashed through peer-pressure by your own pint-sized minions, wait till the DVD.  You'll thank me for saving you the money.  Seriously.  I'm not going to get that time back and I might as well have the pleasure of sneering 'I told you so' when you skulk out of the cinema with an expression of overwhelming dissappointment all over your mug.

3 out of 10... because that's how many times I actually laughed out loud.