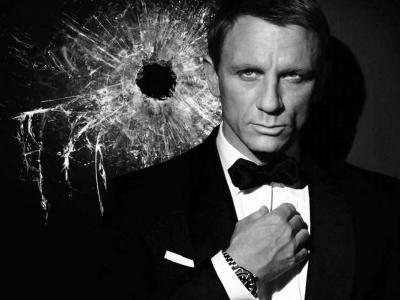 Twenty-four films in do we need an introduction?

No of course not.

So let's get the less successful stuff out of the way first.

It's too long by probably about 30 mins. In fact the whole final act of the film is superfluous.

The plot is convoluted and requires at least a cursory knowledge of ALL of the immediately preceding three films (yes even the really bad one that no-one can remember - oh you know, ‘Quarrel Of Something…’).

There is a relationship that is central to the plot and is absolutely key, but feels very forced and unnecessary (more on this later).

The quality of the effects work from the inside of the helicopter during the fight scene are a bit ropey.

The theme song is terrible (but you have probably already heard it and made up your own mind on that). It is even worse than the Madonna one and the Alicia Keys/Jack White one from ‘Quibble Of Scrotum’ or whatever it was called.

The overall threat makes sense, but is hardly Premier league megalomania, I mean how is it ACTUALLY a threat to anyone?

After setting up that the central female character is strong, independent and quite capable of handling herself, Bond has to do the staple rescue the girl bit.

The chase scene with the aeroplane is very old school Bond and verges on Roger Moore style silliness at times. The trailers give away that it loses its wings, it should have crashed and burned, not turned into a twin engined bobsleigh.

Where is everyone else on the train whilst Bond and Hinx are trashing it?

Spectre is an ok (but lesser) sequel to Skyfall, the niggles I have mentioned above are not disastrous film wrecking obscenities, they just diminish things quite a bit from Skyfall. Of the four Daniel Craig films I would put this third, after Casino Royale and Skyfall but a long way in front of ‘Quartet Of Semolina’

When the Sony hack was perpetrated last year, the material released on the internet about the Spectre script being problematic appears to have been correct.

It feels like several good sections that have been linked together with some poor ones. Badly.

It is beautifully shot, it looks phenomenal in places. Perhaps winning the oscar for Skyfall has given the production team some artistic pretensions.  The opening scenes in Mexico , and the external shots of the helicopter fight scene are really eye popping.

The scenes with Monica Bellucci as the recently widowed Mrs Scarria are very sensuous and arthouse. Which is impressive, considering that the subject matter is pretty dark at this point.

The Car. Finally a Bond car and chase sequence that gives us high speed chasing and proper gadgets. Two vehicles screaming through the surprisingly empty streets of Rome (admittedly it is after midnight at this point in the narrative), with Bond’s hand reaching for the surprisingly low-tech row of special switches, with exposed wiring no less, I knew Bond was tough, I didn't realise he was insulated as well.

Q. Q is brilliant. He is smart, perceptive good at his job, with the right level of rebelliousness and fear for his career that make him a joy to watch.

In fact Q, M, Moneypenny and Tanner get a sub-mission of their very own. This links to the main plot through Andrew Scott’s scumbag bureaucrat and his attempt to shut down the operational services of MI6 and go completely ‘snoopers charter’ on the whole planet.

But the main plot is Bond following up a lead from his ex-boss Dead-M. This leads us by the usual international travel stuff to Rome and the titular S.P.E.C.T.R.E. organization. What is it with villains? They give the game away with their titles. Not only would they get less attention if they used a less conspicuous title, but if they used a ludicrously cuddly name you wouldn't get all of these macho secret agents muscling in on their business.

M: ‘ Ah 007, I want you to fly to Marrakesh and kill the head of the Fluffy-Bunny Corporation’

S.P.E.C.T.R.E. is run by Franz Oberhauser, someone that Bond knows. This is the relationship that I alluded to above. It shouldn't be there, it isn't necessary, and it’s only there for one reason.

(It is just as annoying too!).

Christof Waltz (you can tell he’s evil he wears a Nehru jacket and no socks), gets to torture Bond with some really tiny drills in a surprisingly gruesome scene whilst explaining the plot.

Then we’re into the final act of running around London in a scene that really reminded me of The Dark Knight.

Time to hang up the Walter, Mr Craig.

Just leave me the car keys and the watch on your way out will you...