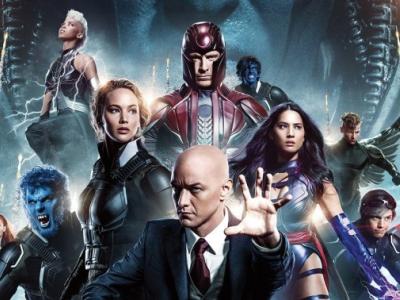 First off, any concerns that the X-Men reboot trilogy would end with a repeat of the disaster that was X3:The Last Stand have been put to bed. Apocalypse is nowhere near that bad, on the contrary in parts it's actually pretty enjoyable; it's also not the end of this run of X-Men films.

Apocalypse, the world's first mutant, reappears on the scene thousands of years after an attack on his followers leaves him buried and forgotten.  He recruits four acolytes and then sets about his master plan to reset the Earth for only the strongest of mutants.  Rivalries, egos and fears all need to be put aside in order to defeat him.  It's a no-brainer popcorn movie at its finest.

As enjoyable as it maybe it does have a few flaws and, like ripping off a plaster, I'll get those out of the way first because there's actually a bit here to be hopeful for,  as far as the future of the franchise is concerned. So, in no particular order... the special effects are dodgy in places (sadly the places where you need them to be good, like the big action sequences), Psylocke and Quicksilver are not as well developed as characters as they could be and Jubilee doesn't add anything, Quicksilver only seems to be in there for another epic slo-mo scene, and, the big one, Apocalypse himself, who is played out a little too b-movie camp in places.  That in itself is not unforgivable, it's a comic book movie after all, but the generic feel of his monologues doesn't help separate this from any number of straight to video b-movies.  He deserved more as a villain.

On the plus side..the new additions to the team are all pretty damn cool. Most noteworthy though is Sophie Turner's performance as Jean Grey.  She brings an edge of vulnerability to a character unsure of the extent of their powers, and scared that they're not able to control them; whilst dealing with the isolation that comes with knowing that even amongst her own she is feared.   If you're a Jean Grey fan you can probably tell where this is likely leading.

Fassbender, as always, is phenomenal, and more layers are added to the Magneto character as he tries to do things Charles' way; living a quiet life out of the public sight until a series of events brings him back into the fray.

For a big summer blockbuster/action flick it's actually the smaller moments that this film does well, it's the character interaction and development (with the exception of the two mentioned earlier) which is really good.  The growing friendship between mutual outsiders Jean Grey and Cyclops is handled well, nothing is being rushed there; Jean and Logan even have a brief moment.  The passing of the torch from the "First Class" X-Men to the new breed at the end of the film is nicely done.  Magneto's fall from redemption and struggle to return is emotional. Hell, even how Professor X loses gains his signature bald look adds a detail that may well be called back to.

The fact that they can tell good personal stories, and that the new additions to the cast already seem to have a grip on their characters, is all very promising stuff.  Even more so once you've seen the end credit scene and had time to think about where they may be heading story wise.  (Note: There is only one end credit scene, and it's right at the very end of the all the credits.  It's also a pretty niche reference.  Have fun working it out :) )

I have my theories on where they're going next, and I do hope they move away from the "single villain-world domination" plots and towards more of the outsider struggle allegory that the X-Men are ideally set up to tackle (more so than B vs S).  If this film is anything to go by, then it's certainly doable with this cast.  The future is looking bright.