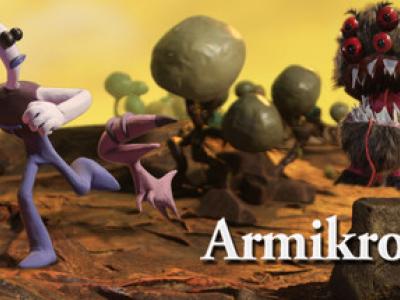 Armikrog starts with a bang.

A crazy almost David Bowie-like theme tune kicks in with a real psychodelic feel, that takes you on a trip with it's imagery. This is followed by a clay animated crash landing on a mysterious planet, introducing you to the protaganist 'Tommynaut' and his friendly dead-pan dog aptly named 'Beak-Beak'. The game itself is visually stunning, reminiscent of claymation such as 'Wallace and Gromit'. From a purely artistic standpoint, the game is fascinating, especially when you consider the time and care which must have been dedicated to create both the environments and characters, as well as the painstaking attention to detail to animation throughout the game.

The game lives in a fairly under-represented and somewhat niche genre in current gaming culture. This is of course the point-and-click adventure genre. Story-wise, the game has a few hits and misses. The general story and overarching plot is entertaining and the animation cutscenes are a treat to behold. However, the main characters 'Tommynaut' and 'Beak-Beak' do not have a vast amount of dialogue. There is enough there to give you a sense of their characters, but in some ways they both feel slightly under-developed, when compared to the LucasArts games of old such as 'Monkey Island' or Revolution's 'Broken Sword' series. In fact, in terms of character-development, there is very little of it. Now this doesn't make the game a bad game, but it forces the game to rely heavily on gameplay over plot, which can be a challenge in an adventure game.

I will be honest here, and say that Armikrog is a game for a very select audience. This game does virtually zero hand-holding. It is very much in the vein of what I would term as 'old-school' adventure games. Personally, I like this approach, in fact I miss this approach. Apart from the recent release of 'Broken Sword 5: The Serpents Curse', there are very few adventure games, and fewer still, games that make the player think. The puzzles are fairly varied in their difficulty, which I do not think is a necessarily bad approach, but some aspects can be as confusing, obscure or as difficult to decipher as the long history of adventure games that came before Armikrog. Again that isn't necesary a bad thing, but repetition is a key factor in this form of gameplay and one which newer gamers may find off-putting.

The game runs well on Playstation 4. I am aware that the PC version of the game reportly had several issues, but in my playthrough on Playstation 4, Armikrog ran perfectly.

This is a very difficult game to review within the greater context of gaming. I would rather review it in relation to it's genre and it's potential audience (which I will do!). Firstly, I would say that the game is certainly worth picking up for someone who enjoy's adventure games. Armikrog brought back a lot of memories of puzzle solving. I had almost forgotten how engaging this form of game could be. It's also reasonably priced, at £7.99 it lasts a good 8 hours, perhaps more depending on how you find the puzzles and is an interesting, if somewhat under-developed plot.

Secondly, does Armikrog stand up to adventure gamings classics, such as 'Toonstruck' or 'Monkey Island'? Sadly, I would say it doesn't reach such lofty heights, mainly due to it's lack of character development and, while engaging, the game has a fairly simplistic plot. What I will say Armikrog has going for it, is that it makes you want to learn more about the characters, and the ending seems to suggest the potential for a sequel. So perhaps the characters will be expanded upon at a later point? Armikrog after all, was a game that was funded by a kickstarter campaign as a spiritual successor to the game 'Neverhood' (also a claymation adventure), which unfortunately I never had the pleasure of playing. Several of the developers for Armikrog worked on the original Neverhood and this is the first game by their indie company - Pencil Test Studios Inc. As a first game for a newly founded indie developer, I would say Armikrog is incredibly successful at what it tries to do, even if it does feel in some ways to limit itself plot-wise.

Overall I would give the game a 7 out of 10 for those that enjoy adventure games.

Let me know if you have played the game yourself, and be sure to leave a comment to let us know your thoughts!