Orctions, a board game from the Birmingham Expo 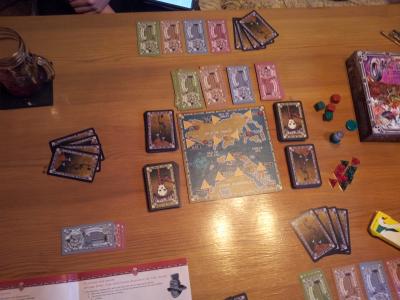 According to the blurb Orctions is a game for 3 to 8 players and takes about 90 minutes to play. And like all great games Orctions combines fun with strategy. Based around 6 Orction techniques and a worker placement mechanic Orctions blends a fantasy world of Orcs with classic Roman Gladiators.

I picked this up at the Board game expo in Birmingham a couple of weeks ago at it's release. Incidentally if you didn't go to the expo make sure you go next year, it was epic. :)

First of all I must say I am impressed with build and art quality, the box and every thing in it has a very nice feel and looks pretty dam good. The rules were a nice easy read (something that can be easy to mess up with complicated rulebooks sometimes) BUT if I have a small niggle it's the order of some of the rules, I felt that during some of the gameplay hunting for certain rules slowed things down a touch.

Onto the game play itself; 90 minutes? A group of four fairly experience game players tried this game out and it was well over 90 minutes, we are going to have a second go at this in the future and see if the game time decreases but even if it does I still feel 90 minutes is a tad on the optimistic side.

During the gameplay itself the main issue we had was with the artwork, it looks fantastic but I feel more obvious colours would have sped the game up as some times we had trouble working out the fine detail on stats. Also the yellows and greens were a little to similar.

The board to play the first section of the game looked really good and was nice and simple to use, the only thing we changed as a group (house rule) was to roll all the D4's first and when placing them you had to use one of the pre rolls, ie. You could not choose the number on the dice yourself but had to choose from the available pool of dice, this made the later section of the game which involved said dice a little more interesting.

In regards to the buying and selling of orcs and buff cards I felt their was not enough buff cards (maybe an expansion pack could be released? I would most likely buy it) There should also be more options to trade and buy or sell Orcs which would help speed the first half of the game up. Being able to trade 3 for 1 with the bank? Being able to buy from the discards at double the cost?

The actual auction section was loads of fun though, really got everyone in the game involved and a great little mechanic. Also good was the way the aution could change each round. This kept it fresh.

The fight mechanic (second part of the game) was good and a fun way to play but I feel would have been better with a larger section of buff cards. It was also a little slow and heavily weighted towards the auctioneer. Annoyingly during the first part of the game all the players were involved which had kept the game flowing nicely but during the fighting section suddenly unless you are not the two people in the arena you have nothing to do.

Cons: The colours on the cards have not come out as vivid as the games website would suggest and can slow gameplay down. The fight mechanic could leave other players a bit bored. Quote of the game : A bit like monopoly with Orcs.

Conclusion: A good game but not great, I would still consider this a game in 'beta' but with some modifications this could go from good and played every so often to a regular game to play. A game to keep an eye on.