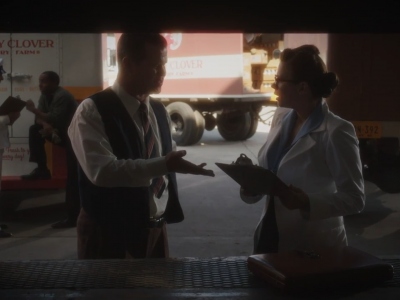 After an Explosive (and Implosive) start to the series, we now need to get down to business. The business of clearing Howard Stark's name.

Being such a popular, millionaire philanthropist playboy, you'd think that it would be quite tricky to find anyone willing to stick the boot in. Surprisingly you would be wrong.

It's a given that the boys at SSR are none too fond, as Stark is their target, but unfortunately after one of the silent/scarred guys destroyed a factory in the last episode, the boss of Roxxon oil, Hugh Jones, makes an appearance.

Now I'm not one to jump to conclusions but...

Jump to your own conclusions, I'm saying nothing.

Jones is happy to let the SSR agents know how he virtuously stood up to Stark in the field of commerce, and that it must have been a jealous Stark that destroyed his chemical plant.

Speaking of the plant, what's left of it now fits on the back of a truck and is being pulled apart for forensic examination.

Meanwhile, Peggy has problems, nowhere to live, and a photograph that could place her at the mobster's party from the last episode. The photo is only one desk in the office away but getting into a colleagues locked desk in broad daylight in a busy office isn’t as easy as it doesn't sound.

Jarvis offers one of Stark's apartments, Peggy points out the flaw in accepting hospitality from suspected traitors, so after much wanted-ad searching, she ends up at an apartment block for ladies only.

There's also the small matter of trying to find out who was in on the Roxxon chemical production of the Nitramene.

A stint as a bossy health inspector gets access to one avenue of enquiry, and a machine from her and Captain America's past gives another.

Again, Peggy shows her field skills by not pursuing a running man. Well not in the same way as everyone else.

There's also the ignominy of having to endure radio serials of Captain America adventures, that portray her as  helpless bimbo Betty Carver. Its a lovely touch and it really gets under her skin. I wouldn't like to be any of the production team if she ever got her hands on them.

In the background, the silent assassin is given permission to complete his mission to get the Nitremene and dispose of Carter.

Team SSR do seem a little more confident this week, still not a patch on our Peggy, but they can't all be completely useless, even the comic relief one.

They manage to follow up on leads and ALL of the pursuers converge on a Milk truck full of the bad stuff...

I'm still loving this, it’s fun, the fact that Peggy has only Jarvis and the sole sympathetic Agent Souza rooting for her  (even though Souza is not aware of her mission for Stark) means that everything that she does has to be secret at all times and that everything, even her private life is 'on mission'.

Also, there’s an interesting comment regarding a watch that she needs to abandon "Sorry, Nana" . Is this the same safe-breaking watch we saw last week? Has it anything to do with the lockpick brooch that appears this week? If so ... WHO THE HELL IS NANA!

Is there a secret history of secret women in the Carter family?

One thing that isn’t secret is that Peggy needs some help. She’s only just scraping by and only just not getting caught. It seems to be a developing theme, she needs a team to support her , but she’s worried about getting people killed.

Once again, a whole load of fun is to be had watching this series. It already seems a shame that this is going to be a short series. I think it has loads to offer a wide audience.

You never know , it might even spawn its’ own spin-offs