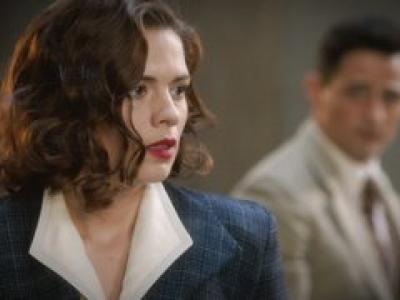 Almost immediately this week you can see where the consequences of the characters actions are leading.

After being rescued from the Leviathan camp last week, Dr Ivchenko is happy to give information to the SSR team and a relentless Agent Carter.  He happily imparts what he can, but also starts to lead a merry dance with everyone's heads, especially volunteering info about how well female spies and double agents can go unnoticed in a man's world.

After getting annoyed with Peggy's badgering,Chief Dooley caves in and gives Peggy some real field work to do tracking down a female assassin. We all know who that is by now don't we? Well we do but Peggy and Jarvis don't.

How to find a woman who may have been close enough to Stark to get her hands on his vault?

How about his "little black book "?.

Well Stark doesn't do anything by halves and his little black book is a list of women he has gifted jewellery to, to "celebrate" their time together. The list has a LOT of names on it. Following this trail is a painful experience for Jarvis....

But it's too late. Agent Souza has deduced that Peggy is working for Stark and the net closes.

Thing is, as always the men underestimate their quarry, the diner ends up trashed along with the take-down team. Including Thompson (hurrah he gets a kicking!).

Meanwhile though, Dr Ivchenko is showing his true colours, he isn't just a gifted psychiatrist, he's a GIFTED psychiatrist. Gifted with a talent for hypnosis. And in touch with Deadly Dottie...

Clearly deranged, clearly efficient, clearly the most dangerous thing in this series.

The only thing that appears to be more dangerous to your health is being butler to a Billionaire who has a long string of ex's.

Everyone is now after Peggy, can she get away ?

What a fantastic episode. There's now a real sense of urgency.

Peggy's resisting arrest with prejudice is glorious. After all that time being ignored and patronised, she stands up to knock them down. Even Jarvis isn't useless, and there's a wry smile on his face as he helps take out the agents  (even though he's probably given at least one of them a very serious head injury!).

Suddenly the men are taking the ladies seriously, unfortunately for them the ladies in question are way out of the men's league in the espionage, violence and acting fronts....

Dr Ivchenko is a superb manipulator.He  softens up the Chief about his marital issues like a master, and Agent Yauch might as well be an open book of secrets for him. Between him and Dottie they are a very formidable team.

We end with serious repercussions for Peggy. The gig is up, she has no more allies in the SSR, even Agent Souza must now think the worst.

How is she going to get out of this one?