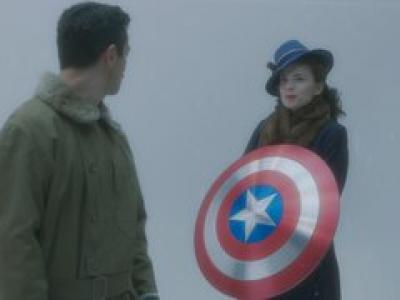 End of plot, end of season, end of Peggy?

We'll come back to that point in a little while.

This episode begins with the gruesome discovery of the effect of one of Stark's inventions, and what it does to one of the SSR boys.

Now that it has been tested with sufficiently eye-gouging results, Ivchenko - sorry, Fennhoff and Dottie put their plan into action. Several people die as a result. Seems to be a theme this.

And after all of the chasing and hiding...

Stark just walks into the SSR building. After complaining about the lousy security contractor that the government uses, he gives the gen on what is actually going on.

Stark is central to the whole episode. We learn what happened at the battle of Finnow and how he connects to it. Starks' actions put him central to the Leviathan plot. Dominic Cooper plays him brilliantly, with swagger and arrogance, but with a streak of contrition about what his inventions do. He still doesn't believe he is a bad person, but Fennhoff puts him straight on that. There's guilt in Stark that is used against him.

As the plan rolls out, all the agents converge on another Stark surprise, the boys go for Fennhoff, Jarvis goes after Stark and...

I'm hesitant to use the term "Girly fight", as there's nothing girly about it. It's nasty and brutal .

It's also too short. That's not me being bloodthirsty, the fight seemed almost to be over before it had properly begun. With all the build up it should have been one of the central pillars of the episode, instead, it feels like it was put in only to get it out of the way.

A replay of a scene from Captain America brings a nice touch and a chance at some redemption for Peggy.

Yep. After all the build up, there just wasn't enough time to do it all justice. Too many threads to wrap up on the plot, and a couple of epilogue style additional things to close off (Including some set up that you could draw a line from to the Winter Soldier).

Either another episode or a little less complexity would have made the end of this series great. As it stands, the final episode isn't as good as what came before.

That’s not to say that it wasn’t enjoyable, it was, and the whole show was superior to the first series of Agents’ Of S.H.I.E.L.D. by a long way. It’s just in certain respects, it tried a little too hard to make things complex and suffered from trying to wrap them up too quickly.

The ultimate payoff on this is a little hard to call. The final scenes for Peggy are bitter-sweet. She gets SOME recognition from her colleagues but ultimately not enough. Her reaction to this seems a little odd. She’s been fighting for equality, but accepts that she’s not going to get the credit, despite the fury of Souza that it’s all so unfair.

And there’s yet another version of the hat! This time in reversed colours. I suspect someone is working on a line of merchandise.

As for the future of this series.

It was generally well received by the critics and those who appeared to make an effort to watch it. Viewing figures though were lower than expected, and it looked to be touch and go as to whether there would be a second series.

Happily though, ABC have renewed Agent Carter and I for one am looking forward to its’ return.