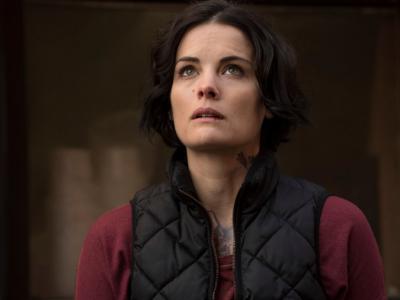 The premise for NBC's new drama, Blindspot, seems on the surface to be a hybrid of ideas that falls somewhere between Memento and Prison Break. The series opens on a busy Times Square as a police man discovers an abandoned bag. Suspecting it may be an explosive, the bomb squad are called in and are shocked to discover that the contents are actually the very naked and very tattooed Jamie Alexander.

In a slightly similar fashion to NBC's other hit show, The Blacklist, FBI Agent Kurt Weller is called in to assist with the investigation into the woman's identity as he is named in one of Jane Doe's tattoos although he has never seen her before. The science blag around the reason for her amnesia consists of an experimental drug called ZIP that can be used to erase selective memories, although she has had a massive dose and has forgotten everything.

The show is wonderfully shot, with scenes that could well have just been gratuitous instead being artfully lit and beautifully crafted. Jamie Alexander puts in a wonderful performance portraying Doe's confusion, fragility and later hints at an underlying strength and resilience that will hopefully grow along with the show. Sullivan Stapleton also turns in an excellent performance as Weller who is both strong and caring and seems genuinely concerned for Jane's safety. I do hope that this develops as simply a friendly, caring relationship as I think it would be too easy for it to go down the typical love interest route.

Over the course of the episode the first strands of the investigation are uncovered and we start to learn a little more about Jane's skills, personality and history.

I have very high hopes for this show. I would say that it's easily the strongest pilot I've seen so far this season and can't wait for next week's episode.

My only concerns are that it doesn't fall into the Prison Break trap where the tattoos only had a limited shelf life before they became irrelevant and the plot went away with their relevance.

For fans of: 24, The Blacklist, Homeland, Memento