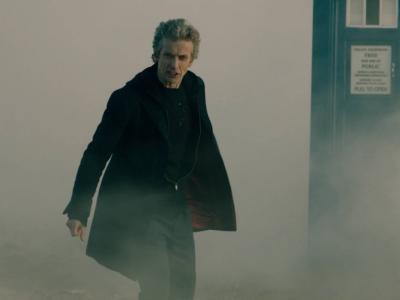 Given that this season seems to be comprised mostly of two-parters, we'll be releasing our reviews after both episodes have aired.

So, we're back again with a new series. We've done a fair bit of dissection and discussion around the trailers for this season on NerdVsWorld and I'm happy to say that it seems a lot of them haven't taken too long to be either proven correct or otherwise.

We're thrown straight in at the deep end with this episode and into the middle of a war. I absolutely love the concept of the Hand Mines and I really want to know more about the war. For now, however we're immediately presented with a dilemma for The Doctor. Does he leave the child that will grow up to become the inventor of the Daleks to die, or save him? I'll skirt over the possibility that it may have been a completely unrelated child who just so happens to have the same name and assume that The Doctor knows that it is, in fact, the Davros. To cut a long story short, he leaves him to his fate and loses his screwdriver along the way.

The majority of this episode is taken up with a game of Hunt The Doctor across many locations we've come to know and love including The Shadow Proclamation and the final resting place of Doctor McGann, Karn. Along the way Missy returns and she and Clara eventually join forces and finally find him having an Axe battle on a tank in medieval England. All of this is wonderfully silly and eventually allows Colony Sarff to deliver his message from Davros to The Doctor. The reveal that his axe foe is actually a human form Dalek makes the whole hunt seem utterly irrelevant if the Daleks had someone with The Doctor all the time Sarff was slithering around the universe looking for him. Still Doctor, Electric Guitar, Tank? I'll overlook the plot hole given that the whole sequence was utter genius.

Once everyone has decided to go along with Sarff we find that we're actually back on Skaro (well played Brendan), homeworld of the Daleks and those poor, forgotten Kaleds. The episode crescendos with the deaths of Missy and Clara and the destruction of the TARDIS. It appears from the cliffhanger ending that, in order to save them, he decides to go back and finish off baby Davros on the battlefield after all.

The second part of this story quickly dispels the deaths of Missy and Clara with another, frankly ludicrous explanation. Again, I can overlook it as the interplay between Clara and Missy is absolutely priceless. Missy has very quickly cemented herself as one of my favourite things about this current incarnation of Who. Her mix of genius, malevolence, insanity and playfulness is truly fantastic. More of her please.

The rest of the episode plays out on a very odd note, with The Doctor slowly coming to develop feelings of sympathy and compassion for Davros until his sudden, inevitable betrayal. What? You didn't see that coming?

I'm still not entirely convinced by the vocabulary limitations on the Daleks and the explanation for them. It all felt a little too MidiChlorian-y for my liking. The final part of the episode with The Doctor going back and saving baby Davros feels a little weird, but I guess it's the bit that you don't see in Bill and Ted where they actually go back and leave the keys for themselves.

I think these two episodes have very much cemented Capaldi's Doctor for me and I now can't wait to see more. Oh, and more Missy too.