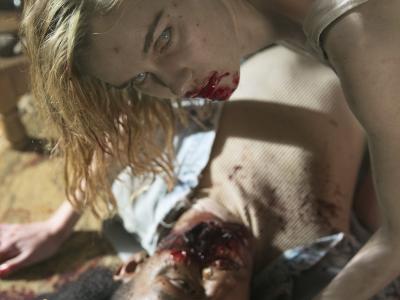 Okay Ladies and Gents, It's the spin off we've all been waiting for...

Well... It's the spin off that I heard about a few month's ago and then promptly forgot about until it was actually released.

After 5 very hit and miss seasons of The Walking Dead, it's time to see what's going on in the world outside of Atlanta in the Deadverse.

Opening in a church with a Johnny Depp-a-like stumbling about in a Shaun of the Dead / Fear and Loathing fashion we're thrown headlong into the Zombocalypse as it begins.

Initial thoughts: I really hope that Nick isn't a main character as my first impression is that he's pretty much a complete asshole.

So, all the ingredients seem to be here. Jocks, nerds, a guidance counsellor, broken families and, of course, Zombies.

About 20 minutes in and we're suffering from a severe 28 Days Later vibe as the Atticus Ross soundtrack kicks things up a notch.

The rest of the episode seems to be a whole load of filler and foreshadowing as Hero Dad goes wandering around in the dark with the junkies to prove Nick's story and Hero Mom keeps watch over Major Cockwomble himself in the hospital as the inevitable next bed zombification continues.

The eventual reveal of the episode is well executed, although my main hope at the end of this is that we'll actually get on with some storyline now that the fit has finally hit the shan.

In summary, the pilot is a lot of frankly unnecessary character background alongside an epic musical score. This show seems to have a very different dynamic and feel to it's parent show but, hopefully, it won't end up being more style than substance.

A cautious five out of ten.