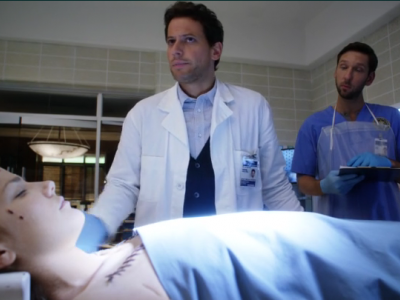 OK - the pilot is out of the way and we have a series.

We don't need quite so much of the hard sell, we've got the origin out of the way, and we can settle down on the exposition.

A young woman boards a taxi in a panic, she is soon falling from a bridge to her death in the river. The police assume that it's a clear cut suicide. Henry thinks not.

By using his super-observational skills of the dead, Henry establishes that the presumed suicide was facing the wrong way and had made attempts to save herself, neither of which would be consistent with a self-termination.

This sets us up on the case of the week which is a fairly bland relationship driven piece.

In reality, the case this week is really to set up some internal soul searching and comments about loss.

A family loses its daughter, a character loses his lover, Henry flashbacks to his early relationship from WW2 of his now dead wife.

Henry doesn’t want to get involved with the family of the young woman, since he does not want the emotional entanglement, and seems to be unable to deal with them on a personal level, something that would seem odd for a 200 year old who would have seen virtually everyone he’s ever met dead by now, and likely to have had many a person cry on his shoulder about ther loved ones, cats, goldfish, tv's, sports teams, countries etc...

It’s frustrating again as a watcher of this, the wisdom of ages seems only to have extended to the Holmesian abilities - although it is interesting to note that a comparison to Sherlock is made on screen, is this a knowing nod to the source inspiration, or an attempt to deflect criticism (look at us being clever eh?).

There are a couple of moments though that show at least flashes some of the life experiences that we really should be seeing more of. Henry makes comments on early 20th century buildings being recently built and being occupied by famous faces that he’s obviously known. He comments that the occupier's family has been living there a long time and when asked how he could know that he replies that the face is familiar.  More of this please! Less Sherlock There are already about 6000 shows on tv at the moment doing the damaged intellectual with amazing powers of deduction  (ok I'm exaggerating, but there are a lot. I know this I have deduced it.....aaaaaarggghhh I'm doing it now!)

The ongoing arc moves ahead, the anonymous messages from Henry’s “admirer” become less anonymous, more personal and ultimately contain something that clearly shocks him.We also see Henry's fear of getting caught dying and getting caught disappearing after dying,he's nearly caught twice this week.

Speaking of personal, or rather personality, this week Detective Martinez appears to have undergone a total personality bypass. Last week, there was a hint that she was a cop close to the edge, a drinker, partial to the odd one night stand,trying to come to terms with the recent death of her husband. This week she follows along in Henry's wake, being so impressed with his cleverness that she's pretty much allowing him to do whatever he wants, with only the occasional question asked so he can grandstand with the observational skills. In the space of a week she's gone from proto-John Mclane to poor woman's Dr Watson (only not as effective).

What I can't work out at the moment is if some of this is deliberate. The Sherlock comment, then at the end a suggestion from Martinez' boss that if she (Martinez) keeps up the good work then the crime board will soon be cleaned up, this metaphorical pat on the back is greeted with a rather uncomfortable silence. Maybe things aren't what they seem...

What appears to be very deliberate, is that Abe is going to be the voice that says "You're old but haven't lived" every week, and "Look at me I'm old and going to die and look at how much fun I'm having...". This week he's Internet dating to show how old people can have lives too.

So, ok it's still early days, we're into the first non-pilot episode so we don't have as many death-resurrections, and this week we get to know that Henry's body disappears almost instantly. We don't get to see the actual vanishing, I hope we'll get to see it happen on screen soon.

Again this week, we have a competent but not inspiring episode, not bad for a first regular episode, but nothing special. I've seen better shows than this cancelled, but I've also seen far worse renewed.

So the game of new show Russian Roulette continues. This week an empty chamber....