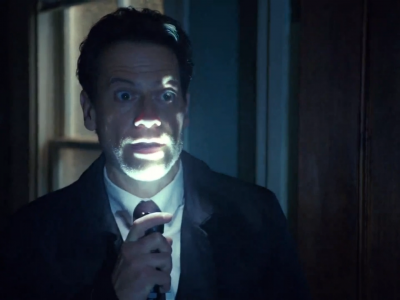 Both of these decades are mentioned in this episode, one as cover (the 1980's) for Henry to mask that he's talking about the other.

This episode sees a body discovered in an old apartment that's due for sale, the body, partly eaten by rats has a hypodermic needle in one arm, and a gash to the head. The assumption is that he's an "ADJ" or Another Dead Junkie.  This contemptuous attitude of the investigating officer offends Henry and brings back memories of 1880, when the same buildings had 400 deaths due to a heat wave.

It transpires that the victim is a boxer and reformed junkie, who's been at odds with a local property developer, the needle was administered after death, so we have a murder...

Well we would, wouldn't we. It wouldn't have been much of a murder mystery show if the initial suppositions around the death were true now would it. It would make for a fantastically different episode though .

JO - "This clearly looks like a clean cut suicide"

HENRY - "Yes, it is absolutely confirmed, 100% unequivocal suicide with no doubt or margin for error "

Yeah, maybe it's for the best that all of the deaths are suspicious.

So here's where the 1980's come in, The Property Developer.

How many times did we see evil property developers in the 80's. It would have brought a tear to my eye if crying wasn't just for wimps. I almost broke out the piano tie and the red braces...

There are in fact two 80's tosspot developers, one modern day, and one in the 19th century. Henry got a good kicking in the past for trying to help the poor unfortunates in the slums, and I was waiting for his modern equivalent to repeat the experience all the way through the episode.

The boxer-munching rats are used to try and help identify the strain of drugs used on the corpse, so between the businessmen and the small furry ones, it's vermin all round !

There are several references to getting Henry to let go of his past and/or possessions, with some ominous comments from Jo about what happens when you burn yourself out. To the makers of this programme, PLEASE explore this more, there's an interesting character there that is being underused!

So the plot is your basic, who's paying off whom, to kill someone, to stop them telling someone else about a thing that would stop them doing something else that would mean that they'd get something. Glad that's all clear.

This episode though feels like filler, no advancement of the arc plot, no death for Henry (in fact there haven't been for a couple of weeks now) , and I think that the writers missed an opportunity here. How cool would it have been to have Henry buried in liquid concrete in the foundations of a building, only to escape by ...well...dying!

So a bit mediocre this week, we need some advancement of characters and plot.