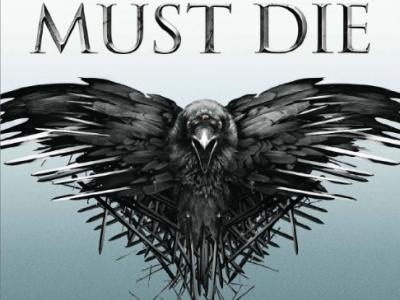 Any episode of Game of Thrones that starts out with a quiet conversation between two characters is obviously trying to lull us into a false sense of security. So, I'm immediately on my guard as a subdued scene between Grey Worm and Missandei takes place. It segues quickly into the overthrowing of yet another city at the hands of Daenerys and her army. Despite urging for mercy from Barristan, Daenerys proceeds to decorate her new pathways with the recently deposed Masters as justice for all the child road markings a couple of episodes ago.

Back in King's Landing Jaime and Bron are continuing with sword lessons. Jaime seems to be doing well right up until Bron literally pulls of his arm and starts beating him to death with the wet end. Well... Something like that anyway. There's a brief back and forth as Bronn fills him in on how he fought for Tyrion in the Eyrie when Tyrion discovered that he couldn't have Jaime as a champion. Bronn then asks if he'll fight for him now.

For the second time this season we get a nice scene between Tyrion and Jaime, only mired slightly by the fact that Tyrion is in chains this time. Despite the setting and the situation, the dialogue seems remarkably good natured with both brothers testing their faith in each other and eventually clearing the air. Looks like Tyrion won't be getting ran through today.

Well bless my barnacles if it isn't the Dread Pirate Littlefinger and his merry men, yarrrrr. Baelish seems to be continuing his inexplicable metamorphosis into a scurvy sea dog while also appearing to be sidelining in regicide as he explains whodunnit to a slightly bewildered Sansa. She asks the question we're all wondering: Why did he do it? The answer... Well... Something to do with sleight of hand, mystery etc, but I can't help feeling that is was just for a laugh.

Then the whodunnit continues over in King's Landing as we see Lady Olenna telling Margaery that she was the one who poisoned he husband. To be honest she seems stunned by the revelation for about a microsecond before she turns her attentions towards seducing Tommen. I'm really not entirely sure why she is due to marry Tommen. Perhaps I missed that bit, or there was a subclause in Tywin's Kingship 101 stating that if your brother gets poisoned then you not only get his crown, but his wife as well. If I didn't already know whodunnit I would be suspecting Tommen at this point as it seems to be a pretty sweet deal from his perspective.

We interrupt this program to bring you a newsflash: It's grim oop north. That's right, we're back in fun-packed Castle Black as Jon Snow and The Night's Watch prepare to take on Ygritte and The Wildlings in the next thrilling round of The Pissed Off Ex-Factor. It appears that Jon's not safe even there as people start plotting to send him off on missions in the hope he gets bumped off to stop him getting any more popular with the fans, or something like that.

Cersei and Jaime set aside the unpleasantness of last week's corpse-side encounter and embark on a fresh new bout of bickering as Cersei accuses him of failing to protect Joffrey and being in league with the Starks before kicking him out. There's a lot more faff in King's Landing with Margaery making a move on Tommen, Jaime whining that no one writes about him any more and then giving Brienne his sword, Podrick and his mission to save Sansa.

Owen from Torchwood appears and swears... A lot... Must be years of repression spilling out there from the godawful scripts of Torchwood Season 1. He swears a bit more and then leaves a baby outside for the White Walkers to munch. Bran, Hodor and the gang turn up to save the baby and instead get captured by Owen. We want to stomp on Owen's face a bit as his men torture poor Hodor. Owen uncovers Bran's identity and he seems to be plotting a ransom. Although, at this point, I'm not sure if there are any Starks out there who could pay to get them back.

Then we have a nice little outro that I'm reliably informed was most definitely not in the books. We see The White Walkers in what passes for their front room, converting the baby into one of them with an icy finger. Scary stuff.

Quote of the week
Hodor
Hodor! (Translation: I want to stomp your face a little bit Mr Owen from Torchwood)