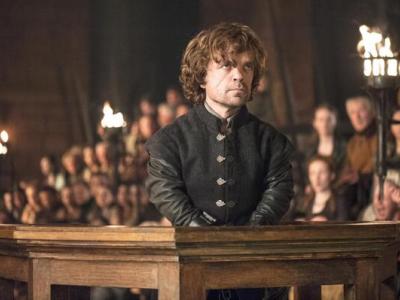 Well then. So this week we finally get to lay eyes on the much talked about Iron Bank of Braavos. It's really not that far removed from my vision of a Gringotts-esque operation after all. Although rather than Warwick Davies being in charge, we seem to have a rather beardy Mark Gatiss. Stannis and Ser Davos manage to persuade the bearded banker that they should get all the money instead of Tywin Lannister and Tommen based on the fact that the Onion Knight chopped off his own fingers. Next week, Jaime will be trading in his missing hand for a new suit of armour and a shiny belt.

Speaking of having things chopped off we're back with what's left of Theon! His sister mounts a rescue attemps but to no avail and, during the battle, we get to see exactly how hard Ramsay Snow is as he partakes in a nice bout of post coital stabbing without even bothering to get dressed properly. Reek then gets his birthday bath as Ramsay plots to send him under cover as .... Himself.

It would appear that I was correct about what the dragons have been up to as well. They're basically hanging around eating goats while Daenerys plays queen. Her conviction in her own decisions is tested a bit in this episode as it is discovered that her vengeance against the masters has included those that spoke out against what was done to the slaves. If things continue in this way she's going to have given away everything she has taken by the end of the series and end up travelling back to Westeros with nothing but her dragons and a few charred goat bones.

The rest of the episode deals with the murder trial, which proceeds exactly like the mockery of justice we were expecting as everyone lined up to put the boot in to poor Tyrion while he's down. None quite so spectacularly as Shae, who we thought happily out of the picture, who not only sticks the knife in, but twists it around a bit, pulls it out, sticks it back in again, jiggles it up and down, pulls it out again, pours lemon juice, vinegar and salt on the open wounds and then repeatedly punches him in the testicles for good measure.

Tyrion seems to take most of this in good spirits and then spectacularly snaps with a wonderfully scathing speech before pulling his special move again. Apparently he can request a trial by combat after all. Sweet.... So do we think it's going to be Bronn or Jaime who takes up the sword for Tyrion this time? And who's going to fight for Cersei? All these questions and more are answered in A Song of Ice and Fire available now from pretty much bogging everywhere. Or, like me, come back and watch the show again next week.

Quote of the week:
Tyrion
Watching your vicious bastard die gave me more relief than a thousand lying whores.