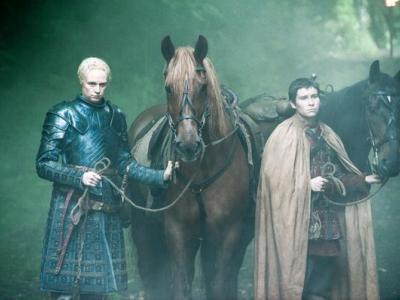 We kick off this week with another wonderful back and forth between Tyrion and Jaime. Somehow I get the feeling that these two had immense fun recording all these prison scenes as Tyrion, despite his precarious position, lists all the things Jaime has managed to get up to over the last few years and is still somehow the best boy. Jaime takes himself out of the running as Tyrion's champion and promises to go and get Bronn after dropping the bombshell that Cersei has named The Mountain as her champion.

There's a nice few shots of The Mountain making offal out some some prisoners/slaves. I'm not really sure what they are, but they aren't around long enough to discover why he's chopping them into little bits. At this point we really want The Hound to come back and face The Mountain as Tyrion's champion, but he's still off with Arya in the wilderness somewhere. Precisely where I'm still not entirely sure of either, there seems to be a lot of looting and pillaging going on in the area as they come across a dying farmer next to the burnt out remains of his home. We then get a scene where we get to see a slightly more merciful side of The Hound as he puts the farmer out of his misery until suddenly it's all arms and legs flailing as someone tries to bite his head off. The Hound quickly despatches his attacker and rounds on another, one of Arya's captors from last season I think. He tells them that there's a bounty out for The Hound and that Joffrey is dead before he is very quickly added to and then struck off Arya's kill list with a swift stab to the heart. Nice.

Jon Snow and The Night's Watch are still arguing in Castle Black. This time it's about sealing up the tunnel in the wall, which they eventually decide not to do and will obviously be their undoing at a later date. Why they're not up to their necks in Wildlings already at this point I'm not sure as we've not seen what Ygritte and her merry band are up to for a couple of episodes now.

Bronn is the next to be crossed off Tyrions list of champions as he basically wants to get himself married and get a castle rather than be impaled by The Mountain. I can't really blame him, although I can't help but feel that this change in Bronn has come about very quickly and seemingly out of nowhere as he was last seen teaching Jaime sword fighting at Tyrion's behest. Obviously feel free to correct me if I have missed something here.

There's a bit more flitting around catching up with people in various locations. Daenerys has a fling with Daario before sending him off to murder a bunch of people. Scary smoke baby lady has a bath. Daenerys changes her mind and decides to give the masters a warning before she has them all executed. Then there's another great scene between Arya and The Hound as we hear a bit of his background while Arya helps stitch him up after The Attack Of The Bitey Mad Man. Then Brienne and Podrick get a lead as to Arya's wherabouts from one of the other kids that got captured and left behind at an inn last season and they trek off towards the Eyrie.

Back in Tyrion's cell, Prince Oberyn comes in for a chat and tells a lovely tale of the first time he met Tyrion when he was a baby. He tells of how vicious Cersei was even as a child and also that her fascination for penises belonging to her brothers seems to have also began at a young age. He also says how King's Landing is full of the people he wants to kill as revenge for what happened to his sister and her children and that he will begin his spree with The Mountain. So, it looks like Tyrion has a champion after all.

Finally, we close out this week in the Eyrie. Sansa gives a well deserved slap to yet another insufferable little prick of a prince before Littlefinger finally reveals that he's got a bit of a thing for her. This is, of course, witnessed by Lysa who confronts Sansa and threatens to throw her out of the moon door. But, just in the nick of time, The Dread Pirate Littlefinger comes to her aid and has a nice, soothing chat with his wife before he hurls her out of the moon door. Yarrrrr.

Quote of the week
Oberyn
It’s rare to meet a Lannister who shares my enthusiasm for dead Lannisters.