Game of Thrones - S04 E08 The Mountain and The Viper 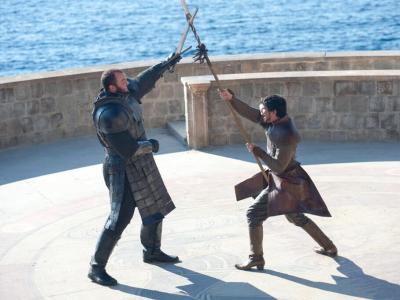 Wow... That was... Yeah.... Before we get onto exactly what that was, let's deal with the rest of what is surely a pivotal episode, certainly in terms of ongoing plot and personal character developement.

Firstly, the Wildlings Strike Again. This time, Ygritte's merry band of rapists and murderers take out the brothel near Castle Black and all it's inhabitants and punters save for Gilly and her baby. Gilly is either one of the luckiest or unluckiest characters in the show with everything that's happened to her since we first laid eyes on her and I'm still not settled on which category she belongs to. Jon Snow and the Night's Watch get all wound up about the massacre and decide what they are going to do about it: precisely fuck all, opting instead to sit around in relative safety and drink wine.

A brief conversation about the fate of Grey Worm's little worm takes place and we wonder whether he is more endowed than we have been led to believe. But apparently not, it appears that both his pillar and his stones have long since crumbled away.

Speaking of missing schlongs, Reekon gets a final pre-mission chat from Ramsay Snow before being sent to take Moat Cailin. This looks like it's going to fail miserably until one of the troops takes matters into his own hands and accepts the offer of a bloodless surrender with the promise of safe passage home. The only passage they actually get to see is their own back passages being pulled out of their throats as Bolton gleefully skins the lot of them.

Around the kingdoms, The Dread Pirate Littlefinger plays his wife's death out at a tribunal as a suicide, aided by Sansa, who finally reveals her identity and decides to back up his story. Now vindicated he launches into full on manipulator mode whipping the Vale into an anti Lannister frenzy. Over in Mereen, the shit hits the fan as Ser Mormont recieves a pardon from King's Landing for spying on Daenerys and is summarily booted out of the kingdom. Either this came completely out of the blue, or I missed this when it was first set up. All seems a bit odd to me and I'm not really sure of the motivation behind getting rid of him. Ah well... We'll see. Ramsay finally gets his Grand High Bastard award from his dad for appendages rendered. How sweet.

Arya and The Hound make it to the Eyrie, and, upon discovering the fate of her aunt, she bursts into hysterical laughter. So do I. And, finally, Sansa hits her goth phase and turns to the dark side.

Tonight's pre-match entertainment comes in the form of another wonderful Tyrion and Jamie conversation. Another sparkling dialogue gents, I applaud you. Your gallows humour this season has truly been one of the consistent highlights. Tyrion's insights into beetlecide form a lovely parallel with the genocides currently taking place across the kingdoms. It's a wonderfully rambling tale which is cut suddenly short and left hanging in the air without any real resolution. A bit like what was about to happen in a couple of minute's time if I'm honest.

What follows is a wonderfully choreographed fight in which Oberyn dominates The Mountain while listing all of his misdeeds. The Princess Bride homage is delightfully obvious, 'My name is Oberyn Martell, you raped my sister. Prepare to die!' Just as we're all happy that he's killed the beast, The Mountain suddenly leaps on top of The Viper and literally crushes him like a grape. Stu Francis would be proud. Assuming, of course, that he's on the list of children's entertainers that it's still okay to mention.

Tyrion is found guilty... Which I find a bit odd as I'm pretty sure The Mountain is dead too... So not really sure what's going on now. Ah well... Roll on next week and the hopefully epic episode nine.

Quote of the week:
Guard
Who would pass the Bloody Gates?

The Hound
The Bloody Hound