Game of Thrones - S04 E09 The Watchers on the Wall 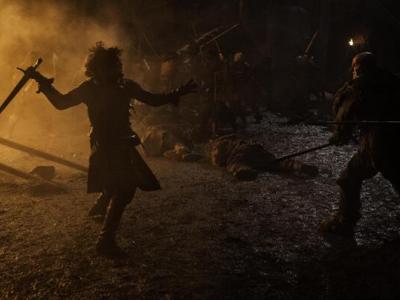 It's been a tough competition so far but tonight we're going to see the final showdown between three of Westeros' biggest bands. Audience favourites, Jon Snow and The Night's Watch have been wowing us all season with their capacity for self delusion, over indulgence and general buffoonery. Ygritte and the Wildlings, very popular amongst the more rural types, have been warming up for tonight with bouts of raping, pillaging and sacking across the lands south of the wall. Then we have tonight's surprise finalists, Mance Rayder and the Woolly Mammoths, who came seemingly out of nowhere and stole not only our hearts, but also our lungs, our livers and quite possibly our spleens.

First up tonight we have a lovely little ditty from Ygritte and the Wildlings in the form of 'I know you didn't fuck that bear' performed flawlessly around a blazing campfire. A wonderful opening gambit which serves to whet our appetite for the inevitable head to head between her and Jon later on in the show.

After a brief interlude from Sam performing that classic , "I'll never leave you again, except for right now, when I'm going to shut you in meat locker for your own protection", we're in for a real treat, one of the finest examples of a 1980's Tooling Up montage that I think I've ever seen. Kenny Loggins would have been proud.

And that's enough of that metaphor for now. With the introductions over, let battle commence.

The battle itself was stunningly executed, with action taking place in different areas of Castle Black and The Wall. As commanding officers start dropping like flies or going into hiding, it's not long before Jon Snow takes charge of the Night's Watch. The action barely relents for the entire episode and the death toll quickly escalates. Standout moments of the battle in my humble opinion were: The Scythe, The Giants, Ghost entering the fray and Ygritte's final fate.

When the dust finally settles, the Night's Watch have prevailed. At what cost though? At this point I'm really not sure who's left alive in Castle Black other than Sam, Jon, Gilly and Slint but I'm sure we'll find out soon enough. Although, right now it's all about Jon going off on his own to try and take out Mance.

All in all, an excellent episode I thought, well realised and directed by Neil Marshall. The panning shots throughout Castle Black in the middle of the battle certainly give a good idea of the scope of the set and how much effort went into this battle. In saying that though, there's only so long that a massive battle can hold one's attention and it was the small bits of character interaction in the midst of all the chaos that really made this a standout episode. While it didn't have the the same gut-wrenching episode of last season's Red Wedding, it was certainly another notch in the epic episode nine post.

Now let's see how everything gets wrapped up next week.

Quote of the week:
Jon
I'm not much of a poet

Sam
No, you're really not are you?