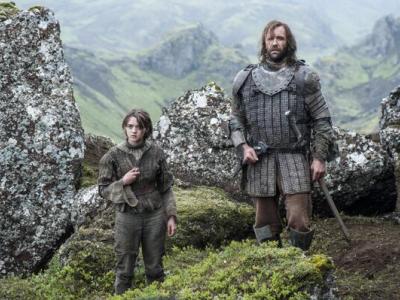 Wow, so... That season went by pretty fast then. Before we begin the long, harsh winter before the arrival of Season 5 let's take a look at this year's finalé episode, The Children.

Picking up immediately where we left off last episode, we follow Jon Snow leaving The Wall on his way to to deal with Mance Rayder. It all seems remarkably civilised given recent events and I can't help but wonder what the Proper Northern Drink was with which they toasted they dead. Snakebite and Black? Maybe a BlastAway? Or a bottle of Dog perhaps? Regardless it all suddenly goes to shit as a massive army appears out of nowhere and trounces the wildlings. I've got absolutely no clue how they got there, but it seems to be Stannis and The Onion Knight fresh from their recent trip to the Iron Bank. I can only imagine that they bought some kind of teleportation device with the money to have gotten there so quickly when every other journey on the show takes months to travel even the smallest of distances. Continuity problems aside, Stannis saves the day. Yay!

Back to King's Landing and The Mountain is hanging on by his fingernails and seems to have been given to a mad scientist for experimentation. This will obviously go swimming well and have absolutely no repercussions later. Cersei sticks a preliminary dagger into her dad and then prompty goes off and jumps on Jaime.

Over in Mereen, Daenerys, having won the war against slavery, seems to be losing the battle for the people. Also, the fact that she's been ignoring her dragons all season finally has some repercussions as they start toasting small children in order to get some of her attention. And, speaking of burnings, all the dead of the Night's Watch and the Wildlings are set ablaze as everyone takes a moment to mourn their losses before the zombies attack.

I'm not kidding either... Cut to Bran's group as they finally find the tree they've been looking for and they are suddenly set upon by a full on horde of zombie skeletons. During an epic battle, in which we lose yet another character, the skeletons SUDDENLY START EXPLODING!!! Holy shit... Okay Game of Thrones, you've got my attention. What follows is a bunch of blaggy exposition that I'll probably need to re-watch about five times to unpick. Something about children, trees, ravens and the fact that Bran will fly.

The travesty that follows I can barely put into words. Brienne and Podrick finally run into Arya and The Hound. This escalates quickly into a scrap after the Hound finally admits that he's actually looking after Arya and that she's better off with him. It's a brutal fight in which the tide changes several times before Brienne finally kicks The Hound off a cliff. Damn you Martin for making an utterly unlikeable piece of shit into my favourtie character and then taking him away. I'm currently in denial about it as we never actually see him die. Until I see his corpse I'll be awaiting his return.

And so, to Tyrion's fate. Unfortunately I managed to spoiler myself quite badly on this one by reading the blurb on the back of one of the books so I already knew of Tywin's ultimate fate. There's a last brief moment between Jaime and Tyrion which underscores how well these two have performed together all series, again, I salute you gentlemen. In another of this episodes wtf moments, we find out not only did Shae stab Tyrion in the back, but she also went and slept with his dad. What follows is brief and vicious and results in yet another coffin. This season's bodycount is truly astounding. There's still time for one final murder to cap off the season and it's at the hands of Tyrion, in the khazi, with the crossbow. It's dark, it's funny, it's quiet. It's the complete opposite of nearly every other death in the show and as such is truly wonderful.

We round off the episode with a lot of the characters seemingly setting sail for Braavos as Tyrion and, apparently, Varis steal off in the night with Tyrion packed away in a little box with his happy meal for the journey. Arya cashes in her coin from back in season 1 and with a Valar Morghulis she's off.

That's it for another year then folks. Keep an eye out on the site for news of next season as we get it, and I'll see you same time next year.

Brienne
I swore a sacred vow to protect her.

Arya
Why didn't you?