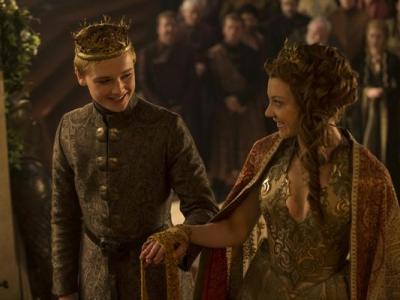 And so, the 'Wax on, Wax off' begins: Arya learns how to sweep a floor.

Dear lord. Not another wedding. Hopefully it's third time lucky for Margaery as she and Tommen tie the knot. The prophecy from episode one starts to unfold as Margaery tries to package Cersei off to Casterley Rock through a not so subtle manipulation of Tommen.

Hello Theon. We've not seen you for a while. It seems he's still Reeking about in Winterfell with the Boltons, Ramsay is still skinning people and his dad is still plotting. It appears the plan is for Sansa to marry Ramsay rather than Cap'n Littlefinger (yarrr). I think that makes it third time lucky for Sansa then too.

The Brienne and Podrick show kicks up a notch as Brienne seems to be finally warming to her squire, telling him stories and promising to train him in how to become a knight.

Jon finally gets around to refusing Stannis' offer and plans what to do with the Knight's Watch now that he is Lord Commander. An interesting conversation with the Onion Knight gives some food for thought with the interpretation of the vow that the Knight's Watch are the shield that guards the realm not just the wall.

Arya has a bit of a clear out in order to become faceless man but stops short of throwing Needle in the drink. This will likely come back to bite her later on as she's not quite prepared to divest herself of her kill list. She is rewarded with a promotion to lofty position of Assistant Corpse Washer. The training continues...

Back in the north, Sansa returns home and Jon doles out the new positions in his cabinet. He unexpectedly names Thorne as First Ranger and gives Slynt the order to take up Grey Watch. Which Slynt refuses, colourfully. This can only end one way. Slynt expects Thorne to stand up for him, but it seems that his appointment to First Ranger is enough to warrant him joing Team Bastard. So, yes. It's off with his head.

Lancel and his sparrows drag the High Septum out of one of The Dread Pirate Littlefinger's brothels and parade him through the streets. The High Septum calls for the arrest of the High Sparrow and so Cersei goes off to have a chat with the very lovely Jonathan Pryce about the antics of his group. During the conversation we learn that Cersei has locked up the High Septum in the dungeons and looks to the High Sparrow for future support.

We are treated to a brief visit to the dungeons of Doctor Franken-Maester and his twitching Mountain-Beast. This really can't end well.

And this week on Two Men In A Box, Tyrion is rapidly losing his marbles and needs to get out and stretch his legs, preferably between someone else's. Although it appears his mojo has deserted him. In the hope that the fresh air might re-invigorate him, he sets off outside. However he manages instead to run into good old Ser Jorah, who I thought we'd seen the last of. He ties Tyrion up and takes him.... Exactly where he was heading anyway.

Doorman
It's good luck to rub a dwarf's head.

Tyrion
It's even better luck to suck a dwarf's cock.