The House of Black and White 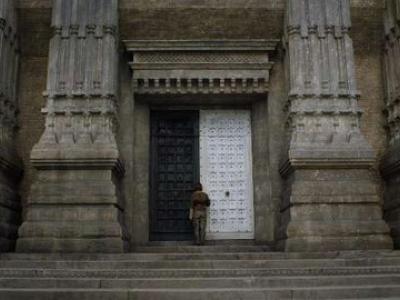 From what I've been led to believe, this is where Arya's story starts to get very interesting. She arrives in Braavos full of hope in search of the Changy Face Man from season 1 whose name I appear to have temporarily misplaced. Now, watching this next scene, I was struggling to place something else I'd seen fairly recently that involved a girl going up to a temple for training and sitting on the doorstep until they agreed to take her in. I couldn't for the life of me remember what what it was until Emma dragged it out from the back of her subconscious. If you haven't yet watched the recent reboot of ThunderCats then I highly recommend you do so. In a flashback during episode 12 you will see a young Cheetara trying to gain entry to the temple of the Clerics. I'm fairly sure one of them must have influenced the other, whether it was the books influencing the cartoon, or the cartoon influencing the show. The similarities are uncanny.

Sorry... Brief diversion there. Unfortunately Arya shows nowhere near the same amount of patience as Cheetara and gives up after only one night of rattling off her kill list.

Then it's back to The Brienne and Podrick show. Previously on The Brienne and Podrick show: Our bedraggled heroes came within a whisker of fulfilling Brienne's vow and finally locating Sansa Stark. On this week's show, she sets out her oath after they happen to cross paths in a local inn and Brienne is once again reminded that she completely and utterly failed to protect both Renley and Catelyn after giving them her sacred oath of protection. So, needless to say, it really doesn't go well for her and, very soon, she and her squire are both hightailing it into the undergrowth with Cap'n Littlefinger's minions in hot pursuit. Rather than giving up at this point and heading home for what I'm sure will be a much more fulfilling life, Lady Brienne inexplicably decides to tail them. God only knows why, or what on earth she's trying to achieve, but we'll see.

Next up, Jaime and Cersei play a rather different version of Hide the Snake to the one we've come to expect from them as they recieve a thinly veiled threat from across the seas. It seems that their daughter may be in a bit of trouble after the death of Prince Oberyn last season and revenge looks to be on the cards. In light of this, Ser Jaime packs up his things and sets off to rescue her. But first of all, he needs a bit of a hand. (Oh yes... I went there).

That assistance seems to be coming in the form of Bronn. Since last we saw him, he appears to have settled down with his betrothed away from all the hustle and bustle of King's Landing. With a promise of a better wife and a better castle in return for his help, it looks like we have a new Lannister/Bronn combo heading off to Dorne on a rescue mission.

Speaking of Dorne, we get our first view of the famed Water Gardens and the introduction of Alexander Siddig as Doran Martell. Oberyn's ex is trying to persuade Doran to start sending bits of Myrcella back to King's Landing in alphabetical order, but he seems to be somewhat of a rarity as far as this show goes as he considers that response to be a little bit too much on the severe side.

The search for the Sons of the Harpy in Mereen turns up a promising new lead. However this lead seems to split Camp Daenerys down the middle as half the group want him hung, drawn and quartered and the rest are calling for a fair trial. Cue yet another round of introspective handwringing from the Mother of Dragons.

And it's back on the road with my favourite duo. They appear to be in a bit of an introspective mood too as they discuss how good Tyrion was as Hand of the King, how every scrap of land has someone's banner hanging from it and the general futility of life, the universe and everything.

Cersei, it appears, has offered a Lordship to the people who bring her Tyrion's head, so it appears that Maester Frankenstein is going to be good for dwarf heads to use in his experiments for some time to come. There's a bit of political play from Cersei as she tries to wrest back control of the small council, but manages to fail spectacularly, succeeding only in pissing off the majority of the people around the table. A tiny bit of dialogue during this exchange makes me chuckle as I consider Jaime and his diplomatic mission to Alderaan. He'd look great with buns in his hair.

Things at Castle Black seem oddly serene as Gilly learns to read and Sam brushes up on his Westeros trivia for when Team Night Watch take on The Eggheads on BBC Two next Thursday. We get a bit more information around the affliction of Gray Scale but it doesn't seem to serve much purpose here. Possibly a plot point for later?

Lo and behold, Jon gets a telling off for killing Mance. But, after the chiding, Stannis offers Jon the opportunity to claim the name of Stark and take his place as the Warden of the North. In a wonderful co-incidence, it's election time at the wall as the men gather to vote in a new Commander of the Night's Watch. Sam finally finds his voice and nominates Jon for the top job. With all the votes cast, the results are tied. So, how do we resolve a tie-breaker in the north? A sing off? A dance off? A beer off? Nope... It appears that they simply get the blind guy to choose the winner. So, it would appear that Jon has a bit of a decision to make.

So... This was supposed to be an Arya centric episode wasn't it? Let's have a look and see what she's up to shall we? Chopping the heads off pigeons you say? Marvellous. A pack of local yoofs happen upon our hapless heroine and, just as she's about to get eaten, Obi Wan turns up and startles them with his mystical powers. Arya follows him back and it turns out that he's Jaqen H'ghar after all. I'm rather pleased they have decided to go with the original actor again as I kinda liked him. And now, off she goes for an entire montage's worth of Wax-On, Wax-Off.

Over in Mereen, the less forgiving side of camp Mysha take matters into their own hands and disembowel the captive Son of the Harpy. This leads to, yep, you guessed it: MORE HAND WRINGING. At least this time she finally makes a decision and has the perpetrator's head removed. This is not, however, well recieved. Way to turn a crowd Khaleesi. Even Drogon turns up to rub her nose in her bad decision making. I feel she really needs to come to a decision... Then go entirely in the opposite direction given that all the decisions she makes are monumentally rubbish.

Another very bitty episode this week and, sadly, no sign of any more flashbacks. Ah well, maybe next week.

Quote of the Week:

Varys:
Yes, best be careful, you might accidentally consume some solid food.