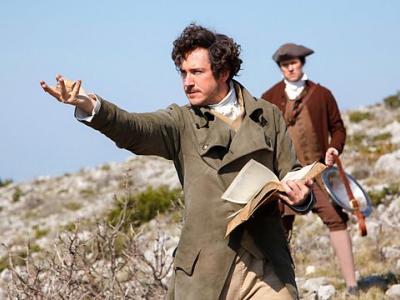 Do not watch this program and Game Of Thrones on the same day.

We all know that GoT has a habit of putting you through the emotional wringer on a regular basis. This show can hit you in the gut too.

Many things struck me after this episode, the usual high production values, outstanding performances, moral questions, and I was left at the end of the episode drained but wanting the next installment immediately.

This is fantastic stuff. It is often said that fantasy is puerile and childish. Not GoT, not this.

The themes are adult, the characters do terrible things. Even the good characters when they need to.

After some skullduggery to get him out of the way by Drawlight, he finds himself shipped off to the Peninsular War in Portugal. He's been assigned as the magician to the Duke Of Wellington. No comfy London society to ponce about in, the respect for magicians isn't there, from either the Duke or his army.

Strange brings the men round by his astounding ability to read.Wellington is a dismissive taskmaster, magicians are an unwanted nuisance foisted on him. He wants cannon not conjurers.

This was one of the best characterizations of the Iron Duke ever committed to screen. Wellington is a coldhearted demander of the impossible and knows it. He commands and Strange must comply. In all honesty though, I wanted the Stephen Fry version of the Duke from Blackadder, but I guess that wouldn't have fit with the tone of the series. Oh well. We can dream.

Speaking of Dreaming, the tragedy of Lady Pole is now taking a heavy toll. Every time she sleeps she is pulled to the Gentlemans' party at "Lost Hope", a fittingly named torture chamber of perpetual dancing.

She's not the only one there either. The continual summoning of Stephen through the bell drags him to watch the dancing, whilst being beguiled into staring into a mirror with a reflection adorned in kingly regalia.

Both Lady Pole and Stephen are silenced about their condition by a second enchantment that makes them spout meaningless sentences when they try to tell anyone what is going on. Lady Pole forms a plan despite her exhaustion to get around the vocal limitation, and for a while it looks like this might work.

Enter Norrell. Too paranoid about his deal with the faerie being uncovered, he sets in motion Childermass, whose actions have tragic consequences. Norrell makes himself VERY unlikeable this week. To paraphrase 'What's that you say, you're dreadfully unhappy? Well you've only got another 75 years of torture but don't worry it will do wonders for my career, so if you could just stay in this room strapped to the bed for the next three quarters of a century we'll say no more about it'.

In Portugal, another tragedy forces Strange into extreme measures. Effective certainly, and highly praised by the army. As usual, there's a catch...

Emerging from slightly left-field in all this is Arabella. Bright, intelligent and with a solid moral compass that deflects a dangerous offer. That rebuttal though only makes her more alluring to the interested party. Some men are like that though eh? A girl just cant say no without attracting the wrong sort...

The Gentleman has his hooks in as many as he can get, he's popping up all over the place. The real testament to Marc Warren's acting is that he's now transcending the bizarre make up he's in. He's pulling strings that are even longer than his eyebrows...

There are lots of things going on this week and some real harrowing scenes. Lady Pole's despair, the Neapolitans, the fate of Strange's porter all have impact. The scene from Stephen's past is massively powerful and it overturns everything he thought he knew.

In all honestly I think this series is turning into one of the best pieces of tv I've ever seen. Yes, it might be a bit of a departure from the normal sci-fi/fantasy fare, the use of language might be a bit off-putting to some, but by thunder this is good entertainment, and after all of what we went through in this episode, we end on a cliffhanger when Lady Pole tries revenge.

I'm going to repeat myself. This is bloody good without being overly bloody. Ten out of Ten.