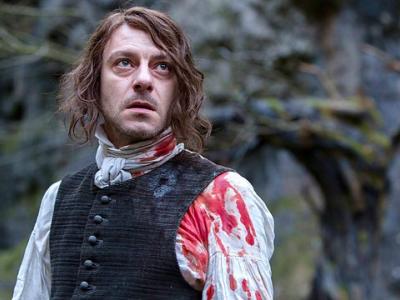 They should have called this Trouble and Strife.

Everyone falls out with someone.

There's a change in emphasis this week.

From the action driven piece last week, we get a more character based episode. Everything moves along though. Plot threads are tugged across the board.

Firstly, Childermass is lying on a doctors table with a bullet in his torso after the assassination attempt on his master. As he moves in and out of death he's treated to a vision with a bird of ominous aspect. A raven, hmmm,I wonder what that could represent?

Lady Pole continues to be thoroughly crapped on. Since it was her shot at Norrell that hit Childermass, the general consensus is that what little sanity she had has now left, and she's away with the faeries. If only they knew. So it's off to the madhouse for the poor girl. Norrell as ever wants to remain respectable on this, and to avoid any hint that the magic is the cause, he arranges to keep her isolated.

The two magicians get another patient to attend to. A royal one. It's everyone's favourite mad English King, George III. Norrell does his usual "Magic cannot cure madness!" Strange wants to try some old magic but is denied. This starts to drive the wedge between the two in deeper, Strange suspects that his master is deliberately not trying so goes solo and almost loses the King completely.

Meanwhile, someone is giving private magic lessons under Strange's name. Strange gets his identity challenged , then loses his temper, leading him on an unexpected journey. At its end he finds the culprit, it's someone we know.

Stephen is escorting Lady Pole up to her new asylum, and nearly commits magically enforced regicide. When he gets to his destination we find Segundus and Honeyfoot have branched into private healthcare, their first patient being the luckless Lady. She is unsurprisingly not pleased.

Some of the secondary characters suddenly come to the fore, Segundus and Honeyfoot behave admirably, Childermass starts to doubt his master (well you would if you'd just been chastised for taking a bullet for him), and Lascelles...

Yes, Lascelles comes out of the shadows, from sycophantic author he rats on his colleague and pours metaphorical poison into Norrells' ear.

So by the end of the episode the dynamics have changed, we've lost any sense of buddy behaviour between the leads.

And there's something nasty growing in a swamp.