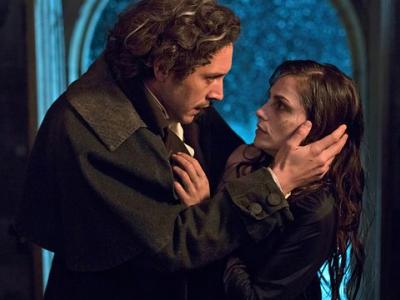 And that ladies and gentlemen is how you start an episode.

Usually the Battle of Waterloo would be the climax of a show  Here we have thousands of troops, battle squares, siege, storming of castle gates etc. Some brilliant effects are in play here, money has been spent and it all shows.

In all of this carnage we find Strange at his military duty, putting out burning buildings and squishing French soldiers. The battle is won, the Napoleonic wars are over, Strange goes home.

All the stress has taken its toll now though and all Strange wants to do is settle down with Arabella, finish his book, have a kid or two and fade into obscurity.

Unfortunately, though, Napoleon wasn’t his only foe.

Norrell and his new best buddy Lascelles are trying to stop Strange's book because their own has suffered because of a scathing review.

The Gentleman has summoned the sinister Moss Oak, now in the form of Arabella for nefarious purposes.

Lady Pole tries to warn Strange, but too late, and Arabella joins Stephen and Lady Pole at Lost Hope, while the duplicate Moss Oak passes away. Strange is a broken man now that he believes he is now a widower.

The precedent has been set though. Strange tries to resurrect his beloved and begs Norrell for information. Childermass is sympathetic, Lascelles is determined to make sure Norrell doesn't help. Bad blood is forming between Childermass and Lascelles. In the blue corner odious slimy fop, in the red corner intimidating ex-thief, magic user. You decide...

A glimmer of hope arises via Honeyfoot, who has recognized the gibberish spouting from Lady Pole as old faerie stories. He and Segundus try to help get around this enchantment. It all gets tense for a while, then Vinculus pops up with a new prophecy for Stephen.

A meeting between Childermass and Strange leads to a violent escalation, a gaol cell and the realization of Strange about how to get what he wants .

It's all getting very dark.

Another emotional clobbering for the characters this week, Bertie Carvel particularly has the thick end of the tragedy bat round the back of the head. He is totally sympathetic as the grieving husband, then totally driven as he tries to bring her back from the dead.

Arabella is now entranced and, as observed by Stephen, is now the only happy person there.

Lady Pole tries to keep fighting the enchantments. She is critical of Stephen for giving in and becoming the Gentleman's bully boy.

After last week showing a little contrition, Norrell is firmly in the grasp of his treacherous biographer. There will be no assistance, information or mercy for his opponent. When things get out of hand, Lascelles and Norrell take any opportunity to discredit the poor suffering Strange.