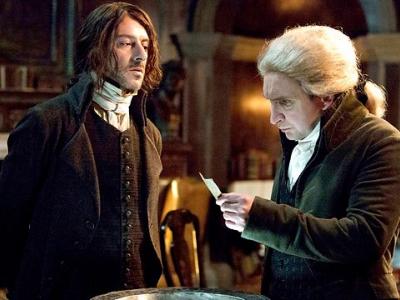 One going bad, one going mad.

Norrell's mean streak comes to the fore. How do you stop the publication of a book to rival your own? You make every copy of it disappear. This is after he has read it of course and is moved to tears by how fantastic it is. He is now at the point of no return. He is going after Strange to stop the unleashing of the things that he wouldn’t tell anyone about...

Then he threatens the imprisoned Drawlight with magical torment if he doesn't find Strange.

On the mad front, we're in Venice, where Strange is on the run and acting out his plan to summon a fairy by making himself insane. He runs into the Greysteels, Flora and James, daughter and father, who have been visiting an acquaintance of the crazy cat lady persuasion.

Flora is captivated by magic, Strange by the madness that they describe in their tale of the “indisposed” Mrs Delgado.

Strange takes it upon himself to do what his master would not and try to cure madness, although his method is not what you would expect. Mrs Delgado  gets her heart’s desire, he gets a dead rodent. Not any dead rodent mind you, a special one that bestows madness on to any that are prepared to consume it. In fact the cat lady was SO off the deep end that simply popping the thing in his mouth is far too much for Strange to handle. He needs to dilute this.

Once he’s a tad mad from a small mouse flavored drink, he summons the Gentleman. He’s done this before and the Gentleman does his usual sneering act, only to be shocked that he can now be seen. This is the first time that we get to see the cocky bugger rattled, it isn’t the last time this episode either.

Up North, Stephen is being taunted by the imprisoned Vinculus, who has an appointment to keep. Stephen finally makes a stand and DOES something. In this case he releases Vinculus on the understanding that this will be reciprocated. Off they go...to a tree.

Back with Strange, his dealings with the faerie give him answers he doesn’t want and others he doesn’t expect. He gets a token from the Gentleman that leads him to revelations and conflict. As a result, the city of Venice gets something truly unexpected and frightening.

Bertie Carvel is superb in this episode. Absolutely convincing and sympathetic at the beginning of the episode, he goes through a whole slew of emotions, and ultimately ends up at cold rage.

Vinculus reveals his true nature to Stephen. A nice scene this, both are the product of someone else’s work. Stephen finally acknowledges that he is subjugated, his ragged companion believes that he can be redeemed. The Gentleman turns up to spoil the party.

The climax to the series is close, there is a showdown coming. The magicians are on course to clash and something has been unleashed through the mirrors of the world.

Here’s a clue for next week.