Sons of the Harpy 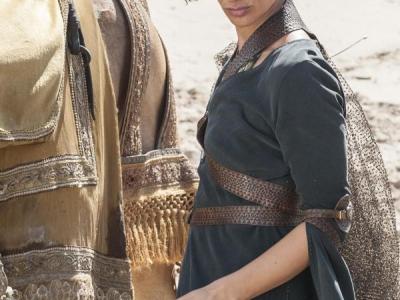 We pick up exactly where the previous episode left us, with Ser Jorah bundling a captive Tyrion into a boat.

Cut quickly to another boat. This one containing Jaime and Bronn. Jaime has a brief, whistful moment as they pass the kingdom of Tarth and he remembers his carefree days of frolicking in the woods with Lady Brienne. Bronn is tactful as always as he asks Jaime to pass on his regards to Tyrion next time he sees him, Jaime's response does not bode well for Tyrion's longevity.

Back in King's Landing and it's not looking good as The Iron Bank of Braavos is asking very nicely for it's money back. Cersei uses this as a way of trying to destabilise Margeary by sending her dad off to ask for better terms on the repayments. I know I say this pretty much every week, but, this can't end well. The other benefit of this, of course, is that it removes the Tyrell voice from the small coucil.

Cersei meets again with the High Sparrow, now High Septum, to outline her plans to create an army of the gods. The sparrows then go on a rampage around the city, purging the wicked and the sinners. This apparently includes Ser Loras. Margaery fronts her husband about this and this leads to a confrontation between mother and son. The king then goes directly to the High Sparrow but is turned away by the Faith Militant and discovers the true feelings of the people towards him.

At Castle Black, Jon swallows a bitter pill as he has to sign off requesting aid and men from Lord Bolton. Scary Smoke Baby Lady then tries to seduce Jon, but his Spookyometer tips into the red and he bats her away. Her parting shot is a nasty one as she quotes that famous line on her way out of the door.

We then get a bit of back story of how Shireen contracted Greyscale and the lengths he went to in order to save his daughter's life. I've very much come round to Stannis this season. I think if it weren't for his association with Melisandre I'd be rooting for him to win.

Deep in the bowels of Winterfell, Sansa is hanging out with her family. Cap'n Littlefinger (yarrr) tells her a tale of Lyanna and Rheagar Targaryen which seems to have kicked off a load of the problems, and potentially explains the birth of Jon Snow (in this writer's humble opinion). An interesting revalation is that The Dread Pirate isn't expecting Sansa to be with Ramsay Bolton for long, his hope is that Stannis will liberate her and make her Wardeness of the North.

Bronn and Jaime hit land in Dorn and we get an insight into Bronn's hopes for the future. Unfortunately it appears their mission may be over before it's begun as some locals find them on the beach. The ensuing fight shows how well Jaime is adapting to fighting with his new hand as an asset.

After a brief re-introduction to the Sand Snakes, we catch up again with poor Tyrion. Tyrion talks us through how Jorah got to where he is now and the likelihood that Daenerys may just execute him rather than Tyrion. Daenerys, however, is still busily wringing her hands over the fighting pits issue as the Sons of the Harpy step up their game. A pitched battle ensues and, at the close of the episode, it looks like Grey Worm and Ser Barristan may not be joining us for much longer. Damn you cliffhanger ending.