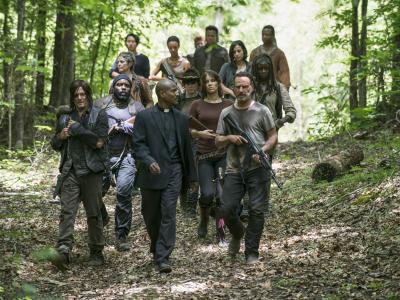 After last week's explosive opener, it looks like this week we've hit the brakes. Some arty slow mo shots and double header scenes skirt over a few of details from the end of last season including Lizzie and Mika, Carol's actions at the prison and a bunch of other stuff including the extra stragglers we gained after The Governor's eradication attempt. We get the first hints that all may not be well as Darryl's Spidey sense goes off while catching up with Carol. My money is on it being Morgan Jones hunting the group for whatever reason he's come up with.

We get a new character this week in the form of a priest who I recognised immediately as Watkins from Starship Troopers, so I immediately expect him to detonate himself at some point to save the group and take out a bunch of walkers. However, over the episode, his character turns out to be pretty much a non-combatant and, in all fairness, a bit of a wuss. There's a hint at something darker under the surface of the priest, but it's skirted over in favour of other things.

This episode feels much more like a supply run than anything else. Simply getting things ready for the upcoming season and giving all the characters a bit of time for some introspection and soul searching before the shit inevitably hits the fan. Most people spend the episode being deceptively cheery and upbeat considering their current predicament. especially Bob who comes across as alarming chipper.

We finally get around to the sales pitch for the trip to Washington and it's pretty much a done deal that that's where this season is heading. Bob's cheeriness appears to be on the wane after the gang return from the food bank run. My money's on him being bitten by the underwater zombie and hiding it.

We cut briefly to Carol and Darryl who are chatting out by the car again, when, out of nowhere, Beth's kidnappers make re-appearance and so they jump into the car and speed off into the night in pursuit.

We're back with Bob again as he wanders out into the woods and breaks down in tears. Looks like my money's safe, until out of no-where he's bashed over the head. Rick appears to have lent his First Person Cam to Bob today as we get the same groggy POV shots as last week. But who is it that's stalking the group. Why, it's none other than our favourite Terminus survivors. Including, it seems, the guy that Tyreese supposedly killed last week. I'm sure it was him. They're back a lot earlier than I was expecting and it looks like they will be providing the predominant threat of the season. I love that they have brought this thread over from the game and the comics. I'm particularly fond of the reveal of Bob's missing limb as they pan out and everyone is chowing down on barbecued Bob. Nice.