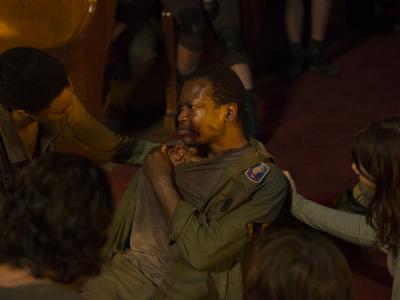 It is my considered opinion that Gareth from Terminus talks too much. Seriously... A couple of minutes with this guy and even a zombie's brains would be dribbling out of its ears. After another diatribe as to why eating people is good, interspersed with lots of unneccessary shots of people eating their Bob Burgers, we discover that we were right last week and Bob did indeed get bitten. Perhaps we'll now get to see what happens when cannibals eat zombies.

Back with Rick and the gang we're all getting a bit concerned about Bob, Carol and Darryl being AWOL. Suspicion falls initially on the preist who, after very little persuasion reveals his dark secret. Which is a bit of a let down if I'm honest. He didn't open the doors and a bunch of people died. Boo hoo.

After Bob is unceremoniously dumped on the lawn, tensions begin to mount between Abraham and Rick as the former wants to get gone to Washington and the latter wants to stick around and patch his group back together. On learning that it's the Terminus guys that are stalking them, Rick sets up an elaborate bait and switch which sees Gareth's gang lured into the church and captured. Rick cuts off yet another boring speech from Gareth rather harshly with a machete along with various other bits of him. The other Terminus survivors are butchered and that kind of puts paid to what I thought would be a much longer arc. And we don't get to see the long term effects of munching on ZomBob. Ah well.

Bob's tearful goodbye seems a little off after what we've just witnessed as he labels Rick a good guy, presumably unaware of the fact that he just carved his former captors into a messy mush.

The group fractures yet again. This has to be for the narrative purposes as, at this stage, I would think they would all know that it's much better for them to stick together. Regardless, Abraham troops off with Maggie and Glenn in tow as well as a bunch of others.

No sooner have they departed when Darryl returns, possibly with Carol, possibly with Beth. we're really not sure. From the looks of it we're going to catch up with Beth's story next week.

There's a lot of jumping around this season and it all seems a bit disjointed with nothing really holding the narrative together. Hopefully something will emerge soon and we can get on with the story as they seem to be setting up storylines and then knocking them down again at a ridiculous pace.