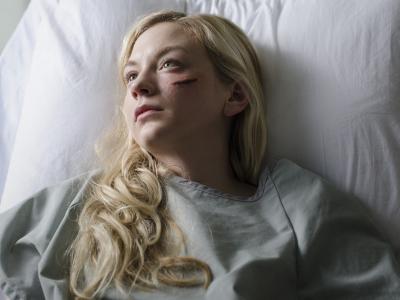 It looks like we're back at the beginning. Rick's beginning anyway. I'm fairly sure this is the same hospital where Mr Grimes started the whole thing off five seasons ago. We're introduced to a bunch of potential red shirts. Head of the gang of hors d'oeuvres is the incredibly creepy Janis from FlashForward who has obviously been demoted from the FBI to a simple cop/sheriff. I wonder momentarily whether they are Rick's colleagues, but then realise that I don't actually care. They are pretty much exclusively arseholes who deserve whatever grisly fate will soon befall them... Very soon... Before they bore me even more...

It jumps around a bit between our one-dimensional wonders doing odd things like slapping and shouting at Beth because someone is dying, halfheartedly attempting to take the fall for Beth's non-error and lashings of sexual preying.

By the point the phrase 'the greater good' is uttered I need them all to be dead... Now.... Seriously.... There cannot be any clichés left to churn out in this one.

After more arty Slow Mo Zombie Slaying and Beth's aborted escape, we get what passes for a twist when we discover that the doctor set Beth up to kill the other guy.

Then, suddenly, Darryl shows up under 'mysterious circumstances'. Which likely means another flashback episode next week detailing exactly what Carol and Darryl have been up to in the interim before we can get back to the actual fucking plot.

I do hope that, after all this, Beth actually maintains the minute amount of momentum she's managed to acrue over the course of this shambles rather than vanishing back into the background when/if she re-joins the main group.

The only thing this episode made me wonder is whether the main cast decided they wanted a few days off or not. Less of this please.